The golden couple: Ben and Jacqui Allen on the podium together

On-athletes and off-road legends. It was an all-Allen affair as Ben and Jacqui both took gold at the 2019 Cross Triathlon National Championships. After the remarkable result, we had to do a Q&A with them.

Husband and wife Ben and Jacqui Allen both took the golden medal at Lake Crackenback as part of the Australian Cross Triathlon Championships on February 23.

After besting a grueling 1500m swim, 30km mountain bike ride and 10km trail run, the pair were able to celebrate together on the podium.

Ben was dominant from start to finish. Building up a lead in the first moments of the race and never looking back. His victory was never really put in doubt.

Jacqui enjoyed a strong race as well but found herself vying for first place with another runner who she coaches. However, when news that Ben had won reached her, she found the extra push she needed to propel her to victory.

Congratulations on a stunning double victory. Let’s start at the beginning; how and when did you guys meet?

Ben: Jacqui and I first met in Sardinia, Italy after an XTERRA race. I had a great race and managed to finish on the podium then I wowed her with my Australian accent and Aussie humor.

You’ve travelled the world together. Can you tell us about some of the adventures you’ve had?

Jacqui: We’ve had so many adventures - all of them unique in their own way. Apart from the incredible people we’ve met along the way, the experiences that stand out have to be the ones that weren’t funny at the time - times when we had very little cash to get ourselves out of situations.

We’ve been known to leave bike wheels and luggage at the airports because we simply could not afford the excess fees.  Sometimes we got lucky but other times it ended in tears.

When traveling around the XTERRA Circuit in Europe, Benny brought a car for $500 - a Renault Saffron. Lord knows how we managed to fit four bikes, luggage, bike bags and the two people into it but we managed - with some items strapped to the roof.  Unfortunately, the aircon didn’t work, so very hot days on the highway with the windows up were not fun.

We’ve had a lot of funny car experiences; we thought it would be a great idea to buy a car on the island of Saipan, when we were there for a couple of weeks. When a local said we could buy his for $100 we jumped at the chance - anything for a bit of freedom and to save the legs for race day. The evening before the race we ventured down the mountain where we were staying for pre-race briefing and dinner.  As the opening ceremonies came to an end, we headed back up the mountain for an early night.

Half way up the hill the car broke down and Benny found himself pushing it up to a safe spot – and we still had a 3k walk up the mountain in pitch-black darkness before we got home to rest our heads for the night.

Not really what you need before a big race, however it didn’t do us much harm as we both finished on the top step of the podium. We can laugh about it now.

Jacqui, what was going through your head when you found out Ben had won? Did you want to do well like him?

Absolutely, heading out on to the final 3.3km lap, my Mum told me Ben had won by miles. A huge smile appeared on my face; I was so happy for him. I could see the race leader not far ahead and I thought to myself ‘come on Jaq, you can do this. How good would it be for you and Benny to stand on the top step together?’

I put in a lot of effort on the downhill section and caught the leading lady. Then I bided my time and caught my breath for a couple of minutes. With 1km to go, I put in a big surge and she couldn’t respond. I ran strong all the way to the finish line and crossed tape with a 30 second lead. It was one of the most exciting races I’ve been in and it gave me so much confidence to know I have that in me at the end of the race.

Hopefully there will be many more races where Ben and I can be on top step together as they certainly are very special moments that we will both cherish forever. 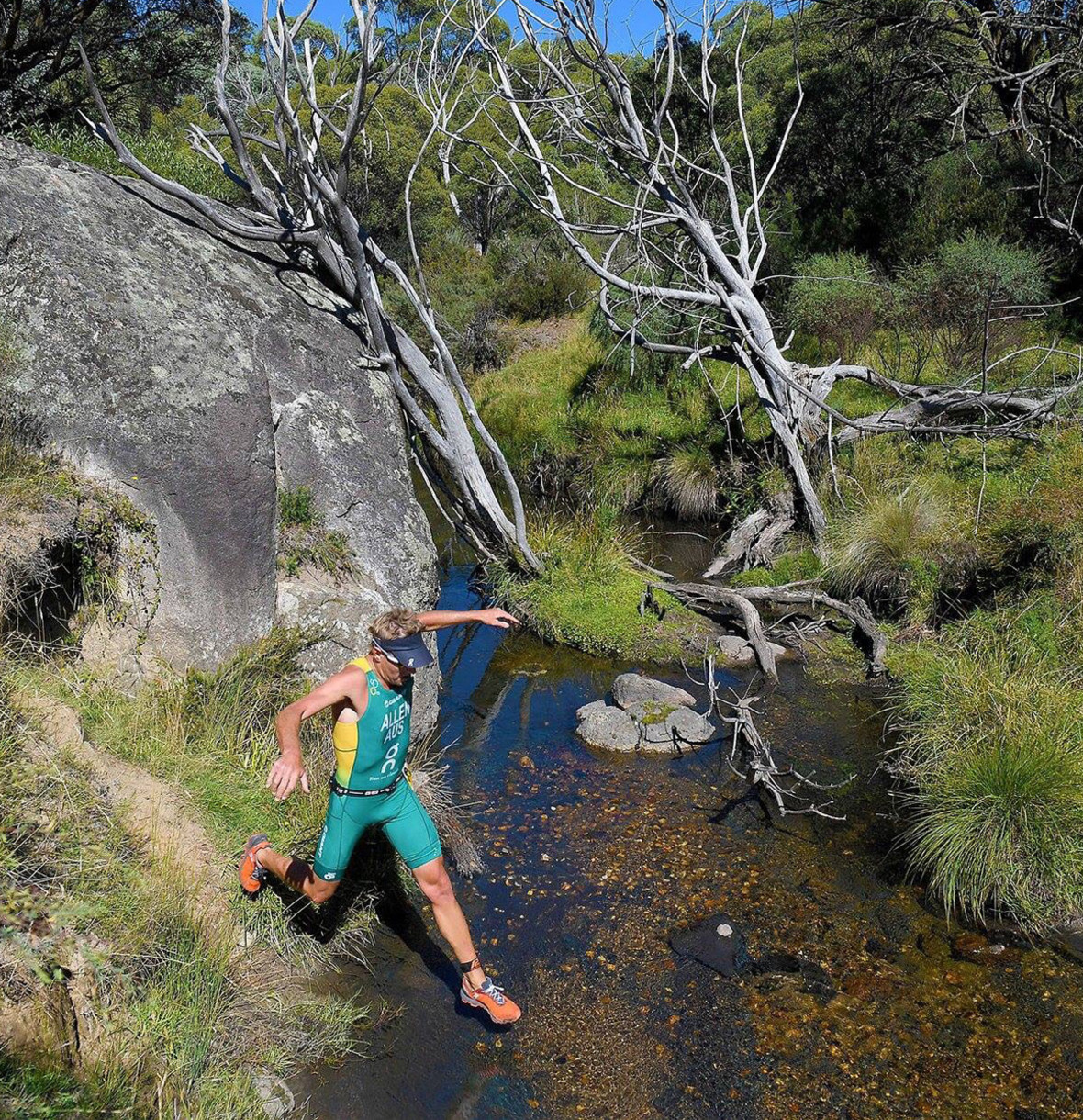 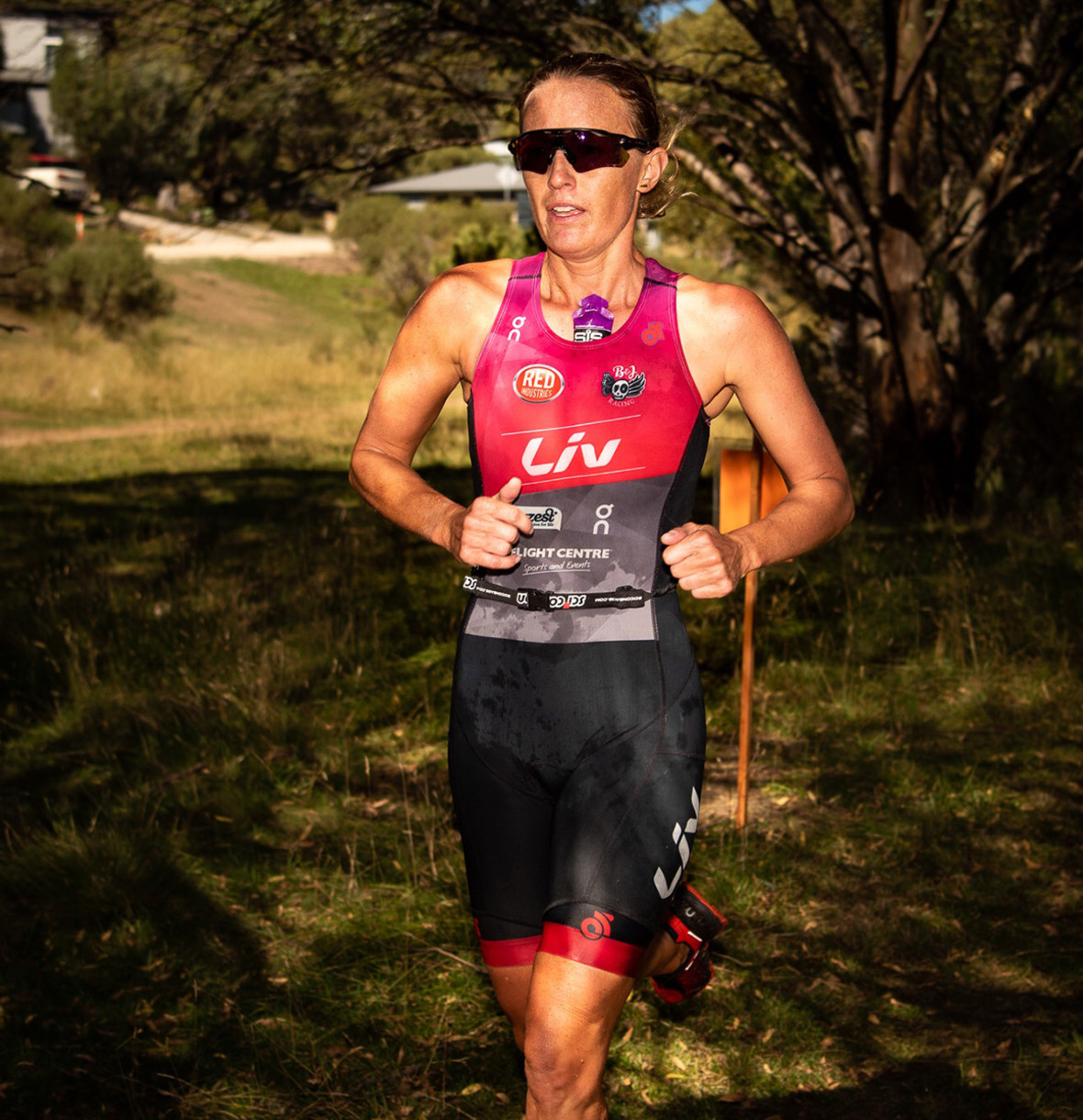 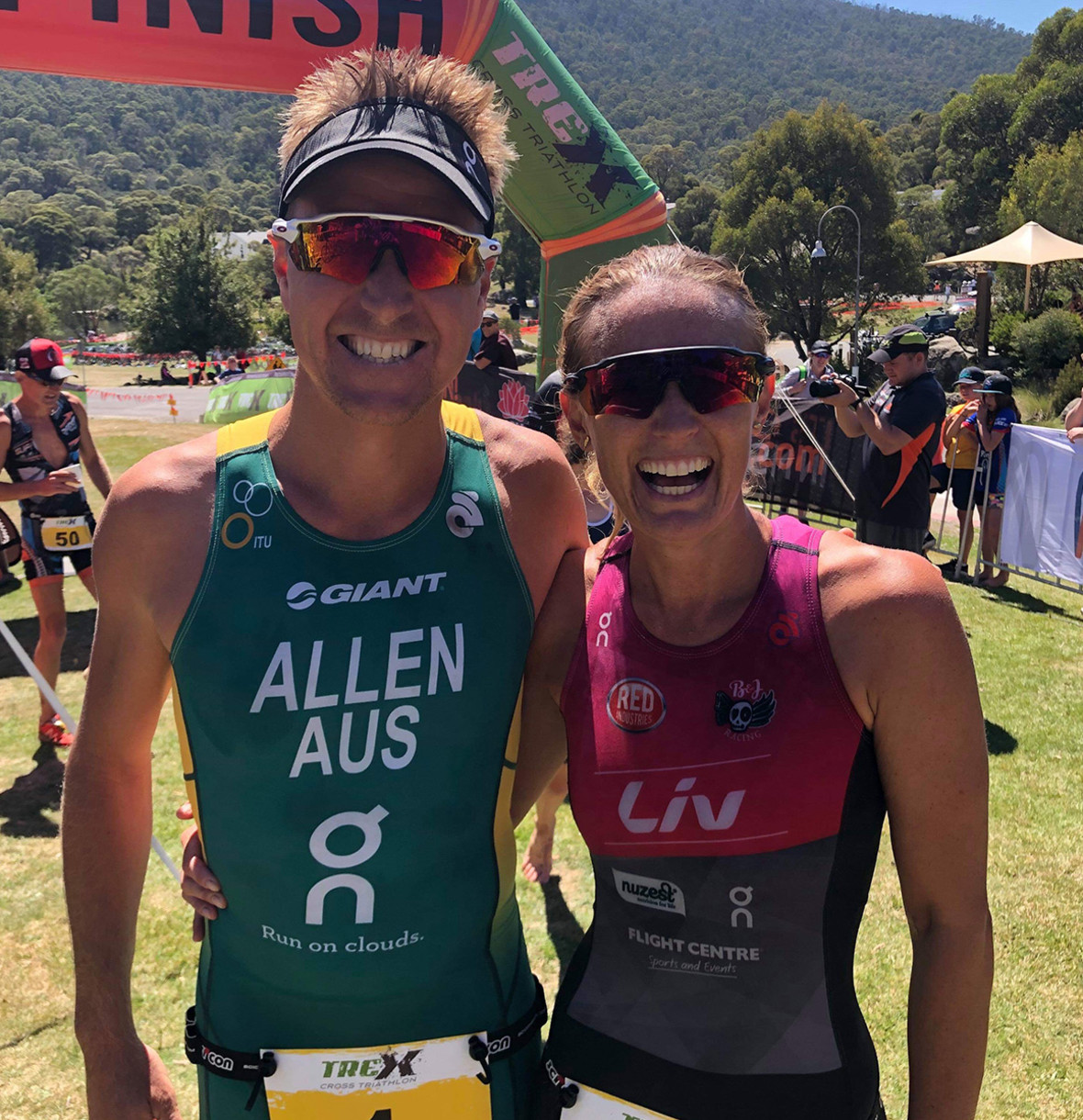 Ben, you dominated your race – leading from start to finish. Were you expecting to do so well beforehand?

Ben: I put in a solid off-season of training; I have not missed a session for the last five months leading up to the race and I felt confident and strong throughout.

No one was going to beat me on my home turf. Plus, I had an Australian title to defend, which made it even more important.

I didn’t know how I was going to go, but I knew if I raced my own race and gave it my all, no one was going to beat me.

How did it feel, celebrating on the podium together?

Ben: We have won a few times throughout our careers together so far and it’s such a euphoric feeling that we try to achieve every race we enter together. It’s a feat we can cherish and look back on with fond memories. To know that we executed a performance that we were satisfied with means all the hard work and investment was worth the time and effort.

Jacqui: To come away from a race feeling proud and knowing you have given your all and that your training has paid off is what we search for as athletes.

To have your loved one do the same is indescribable, you literally can’t get the smile of your face and you feel ready to tackle anything together.

Finally, we have to ask, how did your On shoes perform on the day and are you happy with our products?

Jacqui: When we first started to use On there was only one running shoe; the Cloudsurfer. I think maybe six people worked for On at the time. Even all those years ago we loved the shoes. But mostly we felt part of the family; we were involved in the design process, testing the shoes and offering feedback. Six years later, On has become bigger than we ever imagined and has an excellent range of shoes. We continue to love the product, and the huge range of choice for every type of run, terrain, even fashion – there’s something for everyone. Everyday, I feel more and more proud to be an On athlete.

I have my favorite models but what I love most is the fact that On shoes are developed with purpose, thought and so much love. On has nailed everything about running shoes and remains a great team; to us they are family.

Ben: I’m very proud to say I was one of the very first On athletes. So much has evolved since I tried on the first pair of On shoes. I knew straight away that they were for me. The way they felt, the innovative, functionality and attention to detail was far superior to anything I had used or seen before. I felt fast and comfortable - which enabled me to push myself beyond my running limitations. 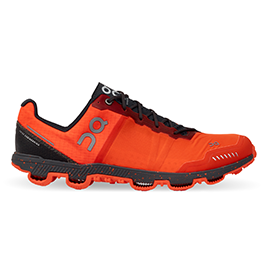 On has a quiver of shoes suited to every person on this planet. I use the Cloudventure Peak to tackle all types of gnarly trails with uneven ground, rocks and obstacles to traverse – sometimes steep climbs. I love being outdoors and embracing the challenge that involves technical running skills. I love On and I am a proud athlete, we are one big family who just love to run! 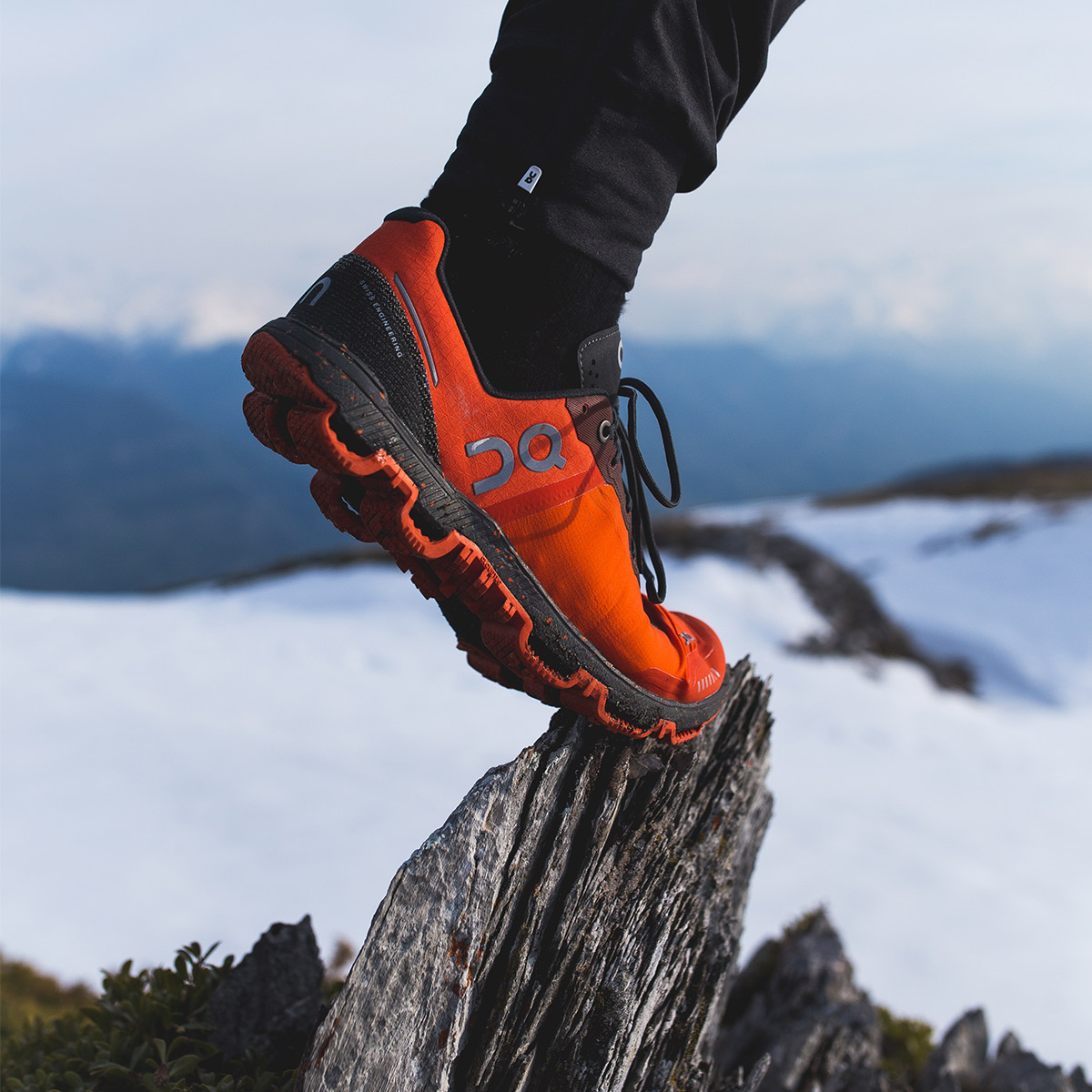