On one of the fastest Ironman courses in the world in Brazil, UK On runner Tim Don destroys the current Ironman World Record by more than 4 minutes with a time of 7:40:23.

At about the 5km mark, Frank (trainer) shouted to me “you can get the record if you run a 2.48” and I was like “what record?” When he said the world record I nearly fell over. I had to really focus the last 10km as I could feel the day was catching up with me. I think focus wise it is the most amount of mental energy I have had to give in a race: it was tough out there...

Tim Don already is a legend.

Even before heading out in Brazil over the weekend, the 39-year-old UK runner has had an incredible career. A three time Olympian, four time ITU World Champion of triathlon and duathlon, and countless ITU World Cup and Ironman victor, few athletes can match all that Tim has achieved. But his performance in Brazil has further cemented him into the annals of Ironman history.

A professional athlete since 1997, Tim has seen it all. His passion for sport, especially running, began at the age of six when he joined the school run club and from there, feel in love with competition. Known for his speed, one of Tim’s most cherished moments was running the Great Manchester 10km in 2010 in 28.56 – just 52 seconds behind the great Haile Gebrselassie – which is, as Tim says himself, “not bad for a triathlete.”

Consistency is key. Do the fundamental right and don’t get caught up in the hype of being a pro. Keep it simple - and just love and enjoy what you do everyday.

I love my Cloudflow. When you get off a hard bike it’s important to put a shoe on you just know is fast and works for you and that’s the Cloudflow for me. Especially in the closing stages when you are pushing the limit and your form is going - it just gives me confidence. I bloody love them! 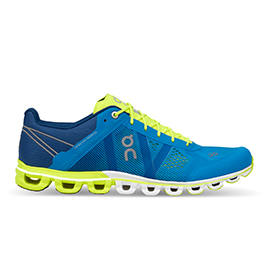 The Cloudflow
The shoe of Tim Don: worn while he broke the Ironman world record.
See the Cloudflow
Tags:
CloudflowAthletesPerformance