On was born in the Swiss alps with one goal: to revolutionize the sensation of running. It’s all based on one radical idea. Soft landings followed by explosive take-offs. Or, as we call it, running on clouds.

The story starts in Switzerland

From small beginnings in Zürich, Switzerland, On set out in 2010 with a big ambition: to change the world of running. In the ten years since, On has been embraced into the hearts, and onto the feet, of more than seven million runners in over 50 countries. And there's no sign of slowing down... 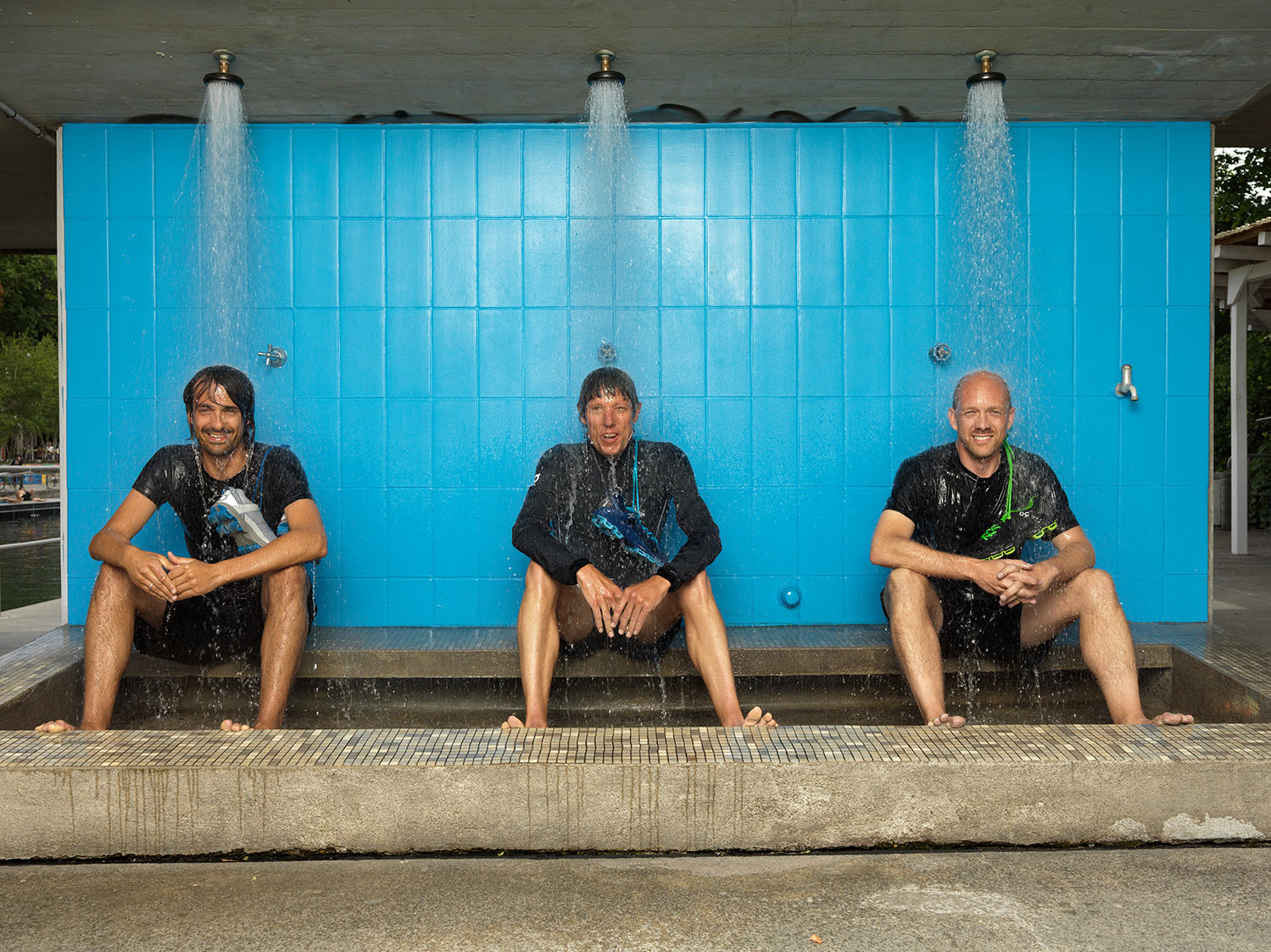 It’s not just a love of running that brought former professional athlete Olivier Bernhard and his friends David Allemann and Caspar Coppetti together. They were dedicated to developing a revolutionary idea. This is their story.

After retiring from professional competition, three-time world duathlon champion and multiple Ironman winner Olivier Bernhard devoted himself to finding a running shoe that would give him the perfect running sensation. In doing so, he crossed paths with a like-minded Swiss engineer who had an idea for a new kind of running shoe. In the years that followed, the perfect symbiosis of running experience and engineering expertise allowed that first radical idea to be refined.

Dozens of prototypes were developed, but the basic concept — cushioned landing, firm take-off — remained paramount throughout. It was this unique running sensation that convinced Caspar Coppetti and David Allemann to come aboard too. Together with Bernhard, they formally established the On in Zürich in January 2010. Their mission to develop a product range fully engineered in Switzerland using the latest technology picked up pace.

Just a month later, in February, the prototypes won the ISPO BrandNew Award, one of the most important prizes for innovation in sport. Test runners were enthusiastic and spoke of running on clouds. In July 2010, the first running stores had On shoes on their shelves.

Ten years later, you can buy On running shoes at over 6500 premium retail stores in over 50 countries. In addition to its European headquarters in Zurich, On has now opened offices in the USA, Japan, Australia, and Brazil. On products are winning international design and technology awards. And there's no finish line in sight. 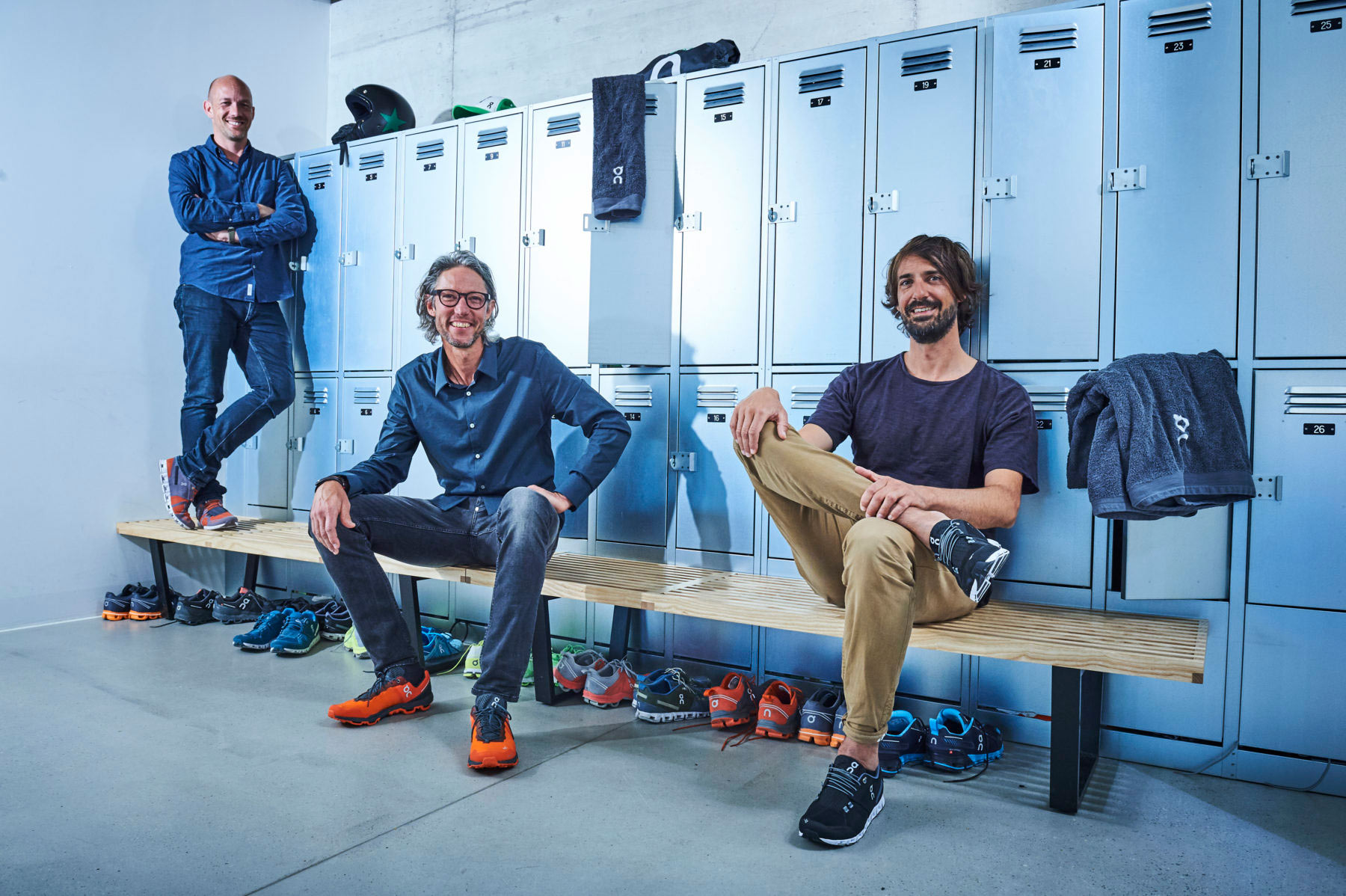 David Allemann, Olivier Bernhard, and Caspar Coppetti design the first On and create a company that aims to make running even more fun.

Studies confirm effectiveness of On technology 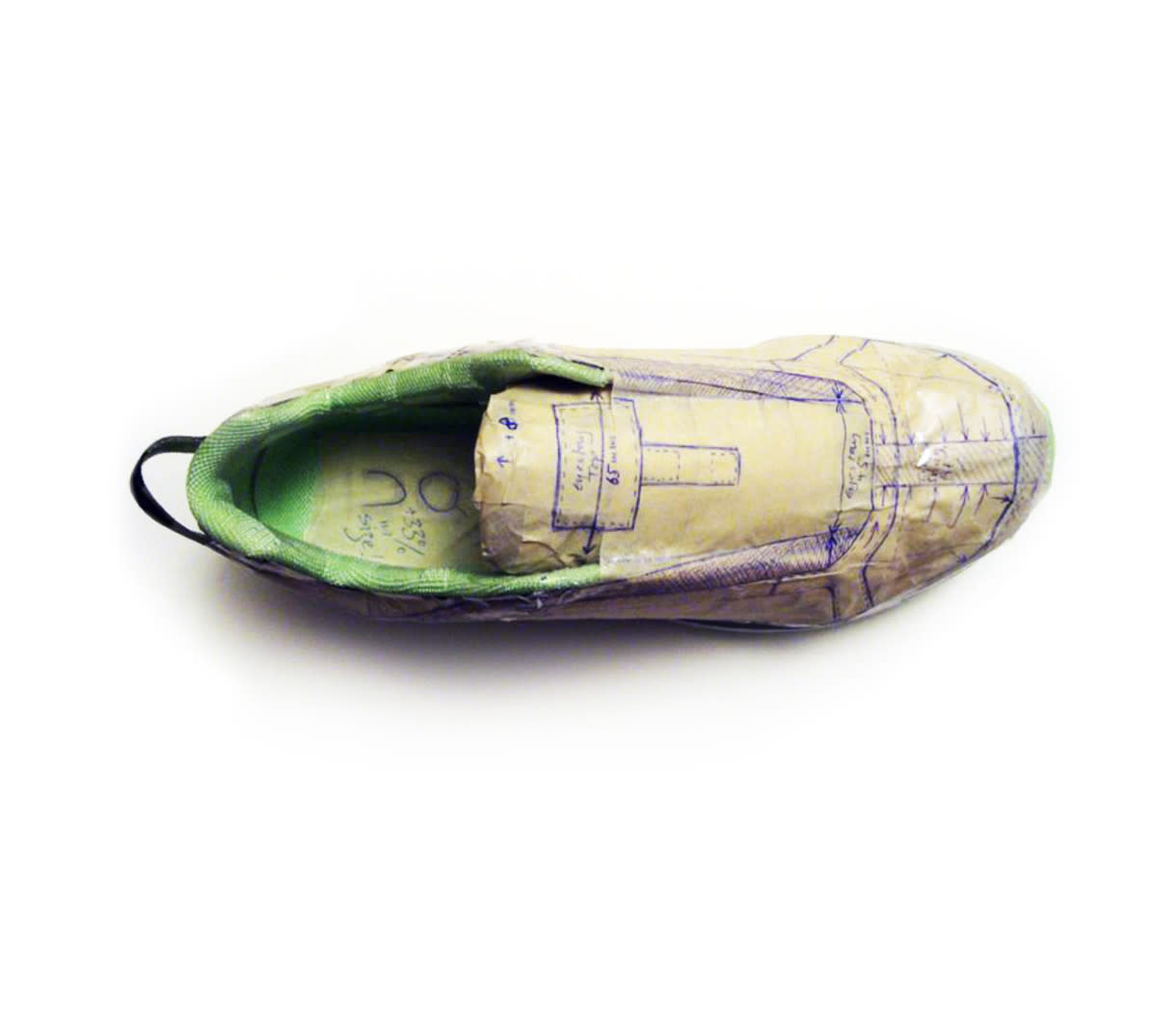 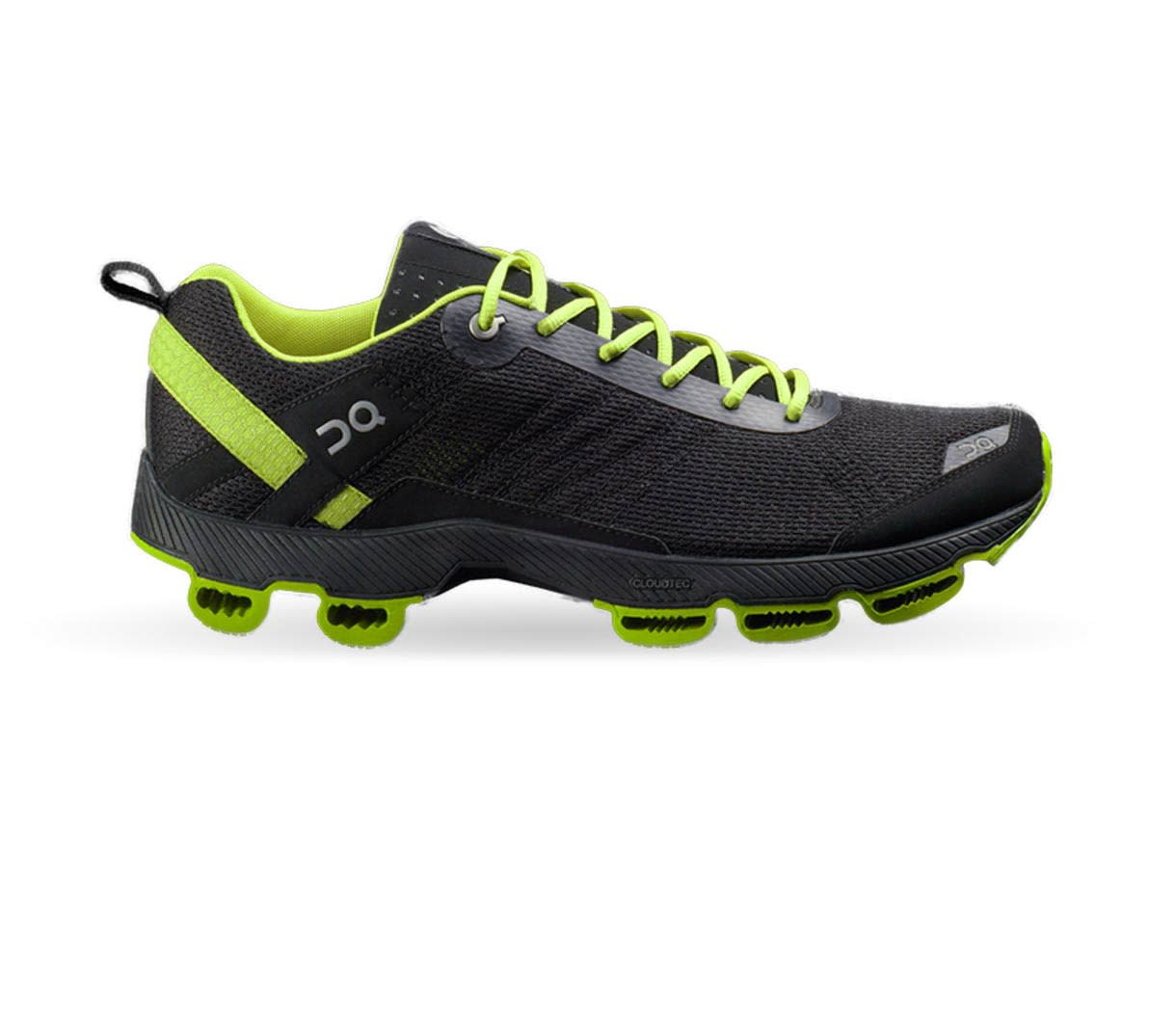 On releases the Cloudracer competition shoe. 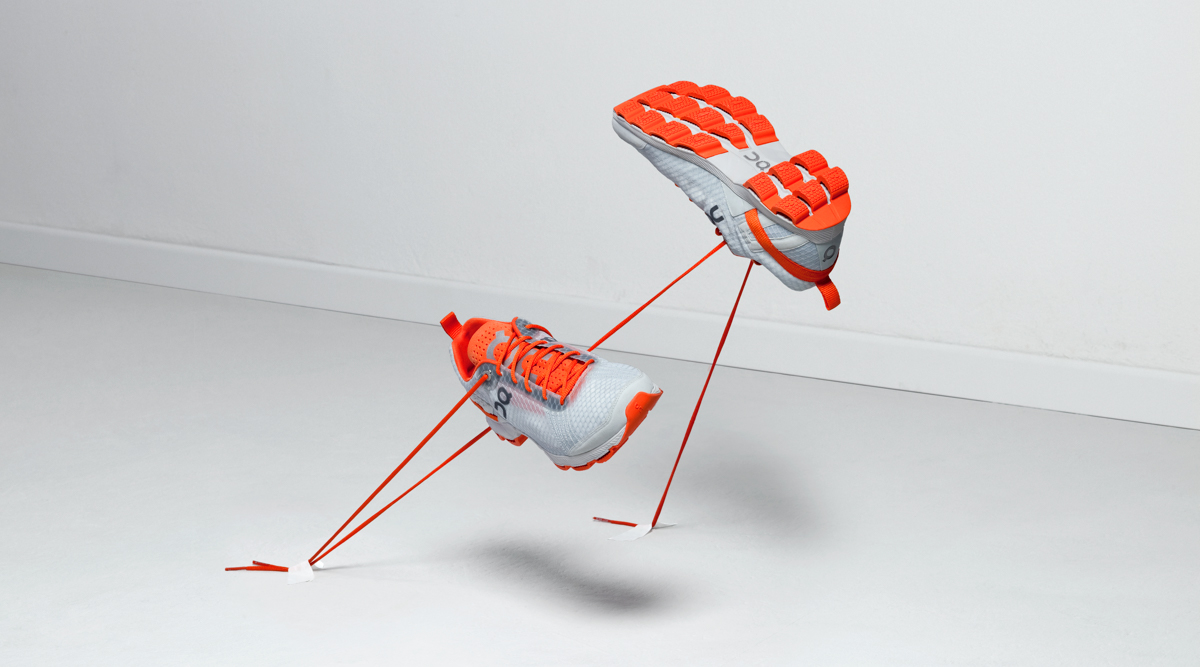 Featured in the Wall Street Journal

The Wall Street Journal describes On as a revolutionary running shoe.

Martin Hoffmann and Marc Maurer join the On team as CFO and COO, respectively.

On adds to its Zurich HQ by opening a US head office in Portland, Oregon.

Switzerland's Olympic champion triathlete Nicola Spirig switches to On and uses the Swiss-engineered cushioning technology to change things up, moving to track and field athletics with more intensive running sessions. 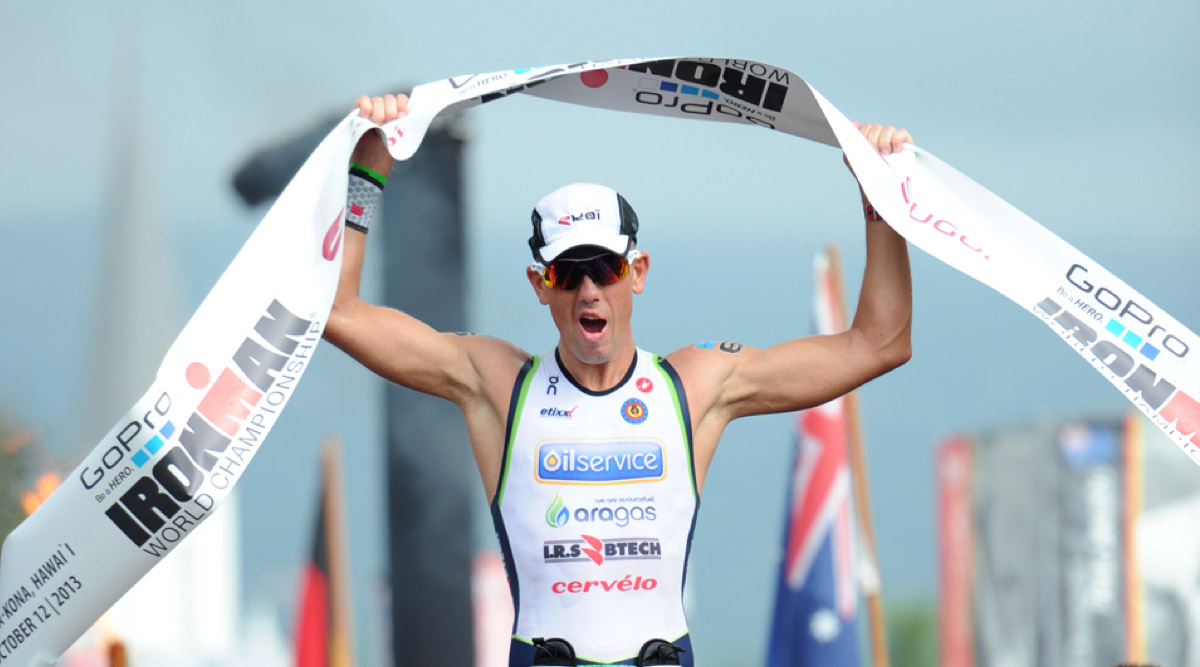 With the On Cloud, On launches the world’s lightest fully cushioned running shoe. 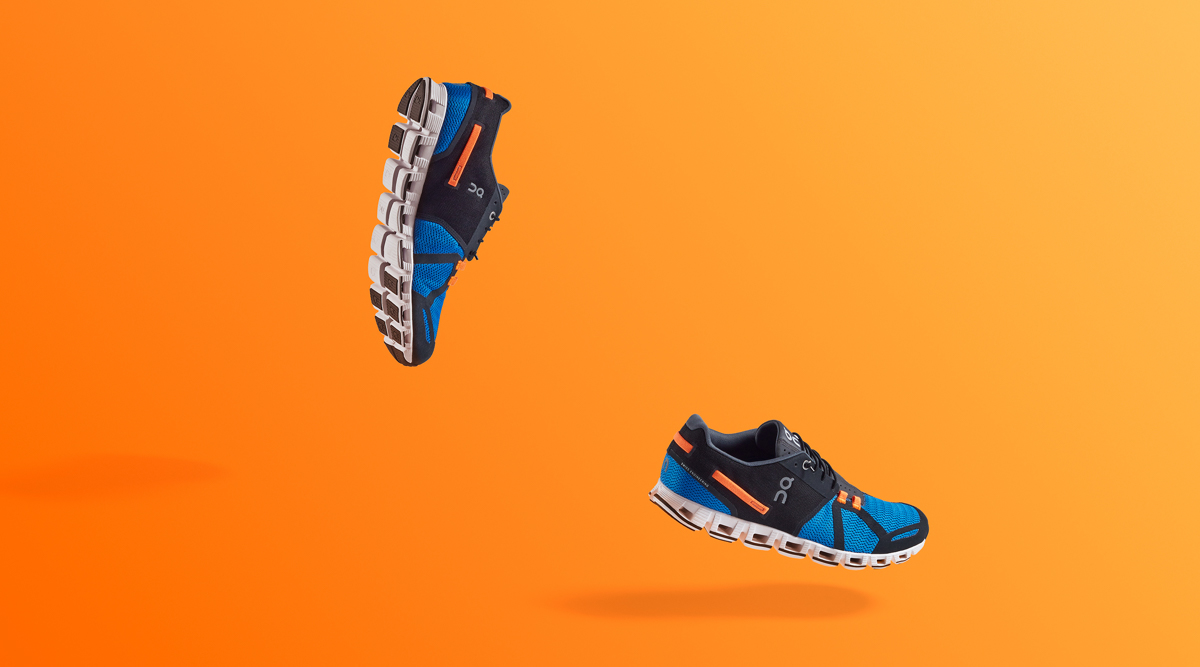 Runner’s World magazine ranks On as one of the 20 most important running shoes in the USA, Great Britain and Germany.

The On Cloud wins the ISPO Gold Award for the Best Performance Shoe 2015/16. 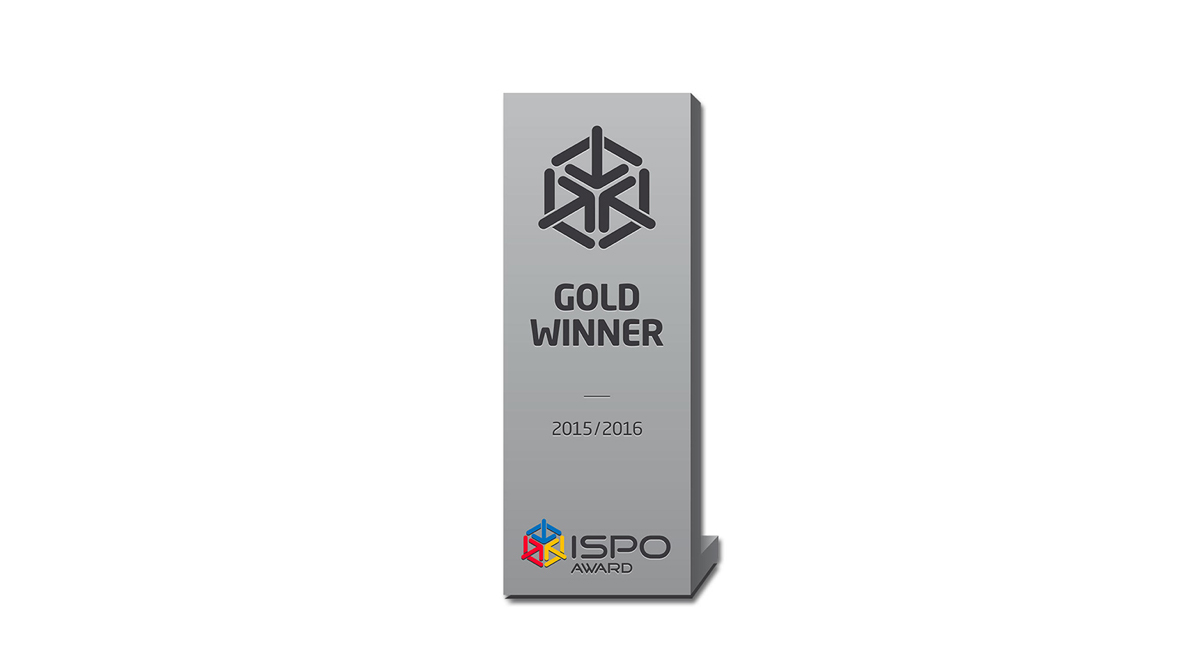 On opens an office in Japan, further expanding its global footprint.

On presents the all-new Cloudflyer that offers stabilty, yet remains light and agile. At the same time, the new Cloudsurfer hits the shelves. Its open Cloud construction unleashes even more speed. 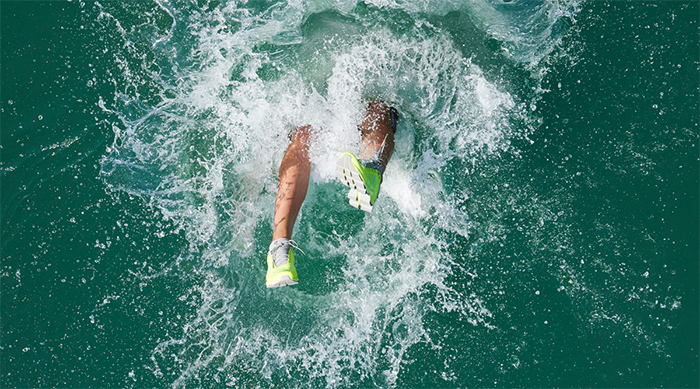 After winning Oscars for Birdman and Gravity, Mexican Emmanuel Chivo Lubezki earns his third consecutive Academy Award for best camera for his work in The Revenant. At the Oscar photoshoot for Variety he wears his preferred shoe: The On Cloud. 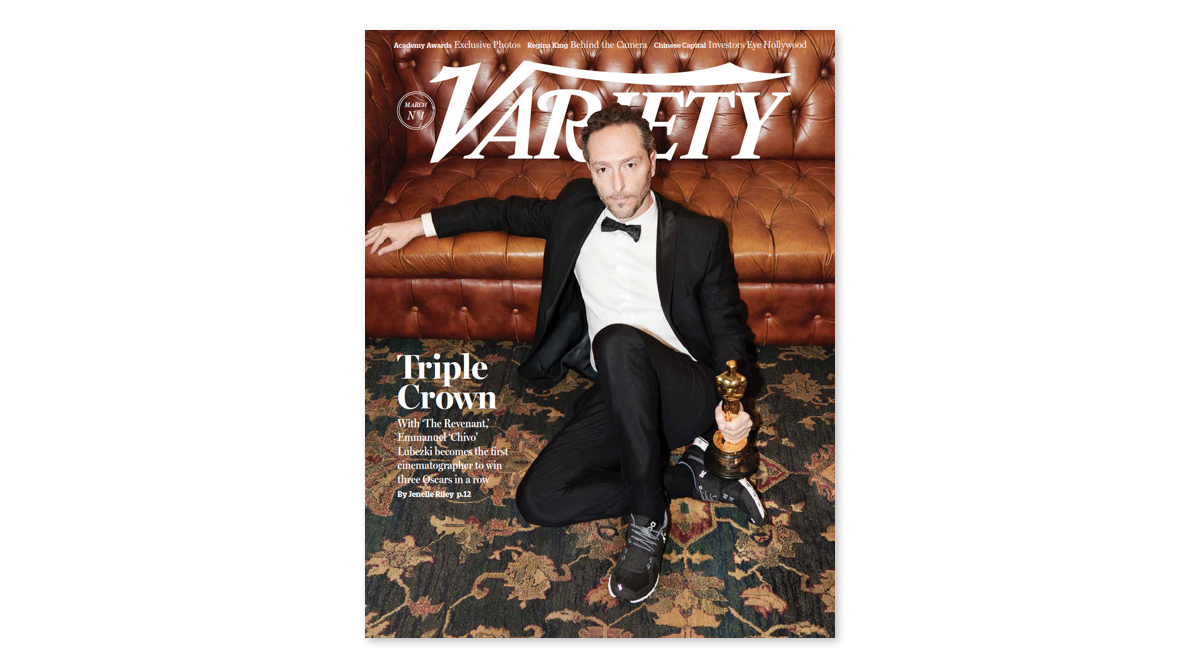 On expands its range of running shoes and launches the Cloudventure family. The Cloudventure is a lightweight trail running shoe, built to excel in demanding outdoor conditions. The soft landing of the CloudTec® cushioning lets runners own the downhill.

Six years after starting up, On introduces its own Performance Running Gear range, engineered to make running feel effortless. 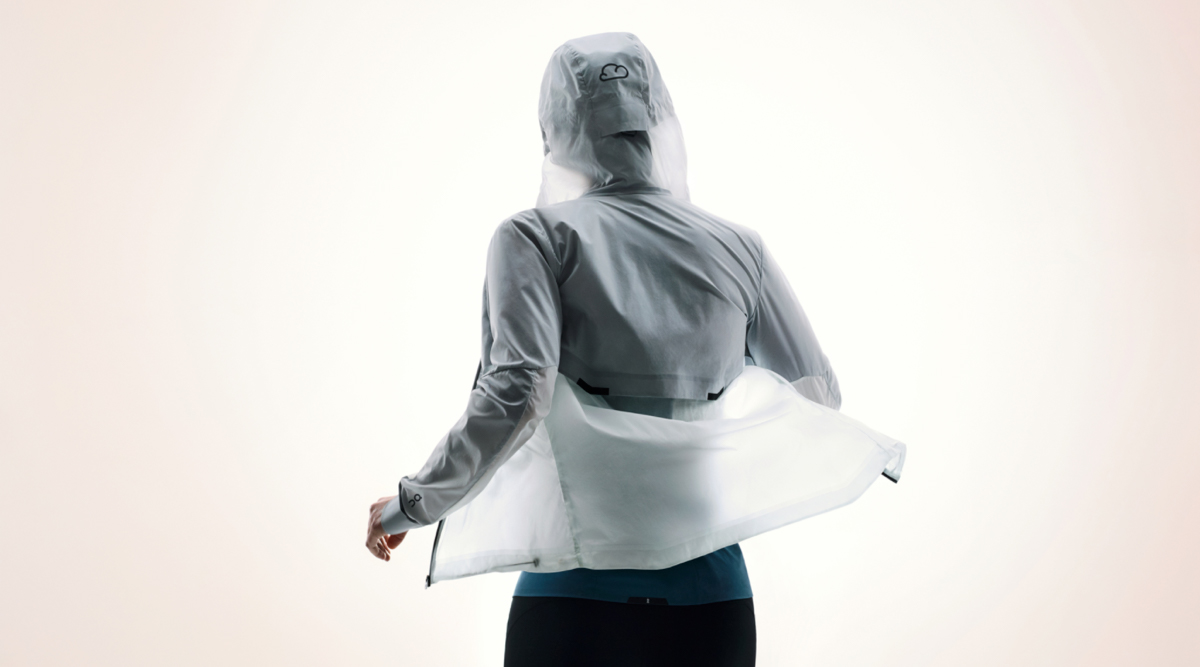 Four years after winning gold at the 2012 London Olympic Games, Nicola Spirig wins silver in the women’s triathlon at Rio 2016. 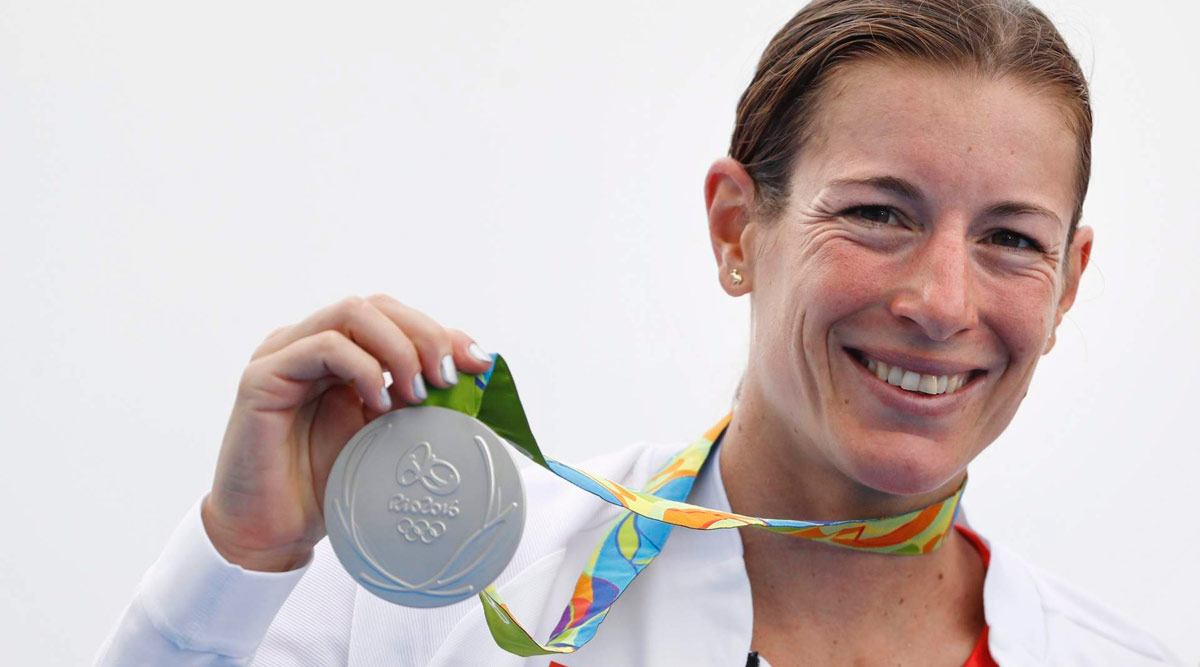 On presents the Cloudflow. A record-breaking 18 Clouds propel precisely where you need it. Ready, set, flow.

On kicks off the year with 3,000 shops in over 50 countries carrying On shoes, while three million happy runners showcase the shoes on their feet.

Two new race shoes are launched with the Cloudflash (ISPO Product of the Year) and the Cloudrush underlining On's performance core.

#WeAreAllOne: On sponsors Refugee Team at the World Championships

A specially assembled refugee team competes at the World Athletics Championships in London, UK, wearing On Performance Running Gear designed specifically to help them shine on the world stage.

The next generation of an favorite is born with the new and improved Cloud, plus the launch of the all-new performance Cloud X for runners that remix their workouts.

Taken to the Edge: The Cloud Edge

The ultra-limited edition Cloud Edge sees the classic Cloud taken to the edge with a street-ready Triple-Grey colorway. And sell out in no time. 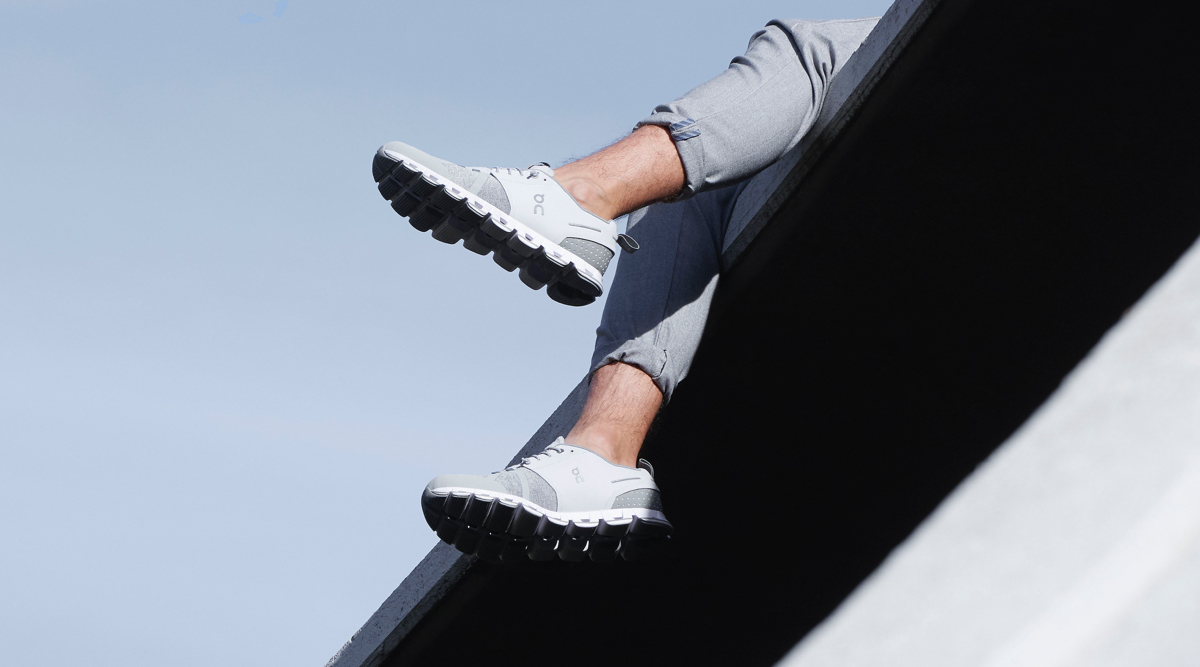 Tim Don: The Man with the Halo

The first On production documents the inspirational story of Ironman Tim Don’s battle back to elite Ironman competition after suffering a broken neck just days before the world championships.

The most advanced On yet arrives with the Cloudace: an ISPO-Gold-Award-winning combination of maximum support and speed. As tested in a 24-hour round-the-world relay, the sensation is Seriously Ace.

The Cloud, Cloudflyer and Cloudventure made waterproof

Waterproof yet breathable, these all-weather editions of On-fan favorites mean you can get out for urban exploration, road runs or trail missions in any conditions. With the expanded waterproof collection, there are no excuses. 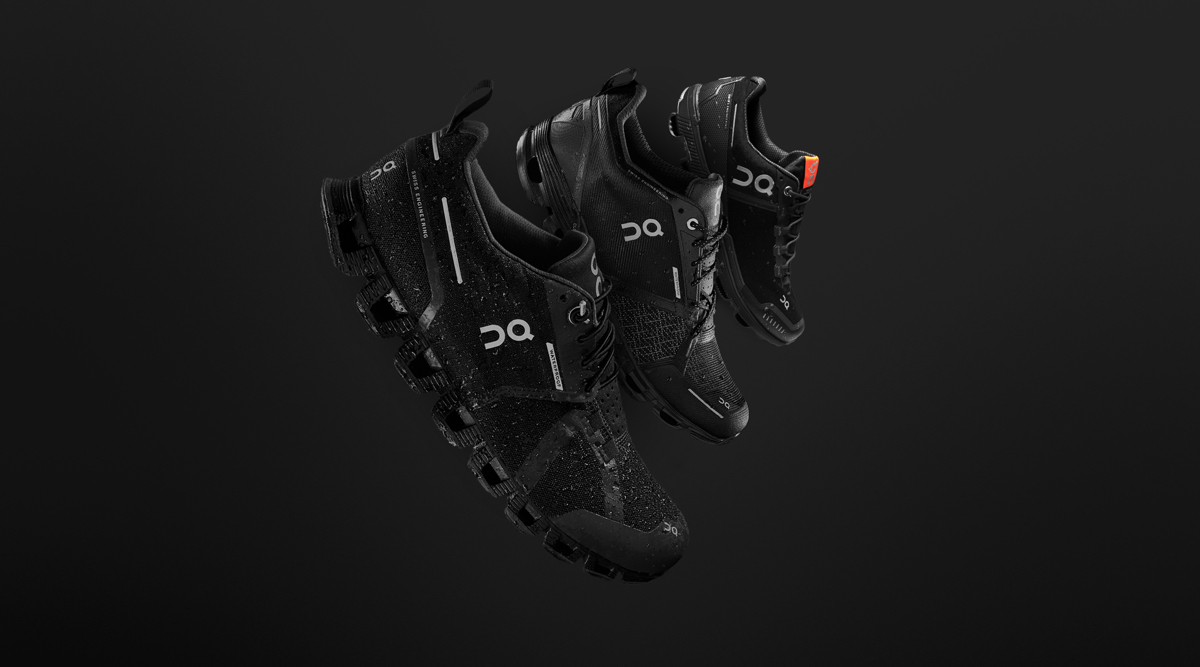 Running on clouds reaches new places with the opening of On offices in Australia, China and Brazil.

The clever cushioning of CloudTec® goes tougher for the trail with the addition of the Missiongrip™ rubber overlay. With its varied traction pattern and stud configuration, trail runners can truly own the downhill.

On partners with top US teams

Two of the most prestigious running teams in the US start competing on clouds. Both On ZAP Endurance and the Mammoth Track Club start training and racing in On shoes and apparel for a Swiss-engineered advantage.

Helion™ foam, cushioning without compromise, drops to shake up the running game. Swiss-engineered specifically to do it all. Lightweight yet durable. Big on rebound and temperature resistance. In short, it’s everything you need to run on the road.

The first shoe to feature Helion™ is the Cloudswift. Made to perform on hard surfaces and protect from impact, and with a sock-like engineered upper for snug comfort, it’s the ultimate urban runner.

The first Run Your Local Mountain (RYLM) event is a huge success as more than 81,000 runners in 180 different countries team up to climb an incredible 21,104,426 meters in just one weekend – smashing the initial 10,000,000m target and having a lot of fun in the process. 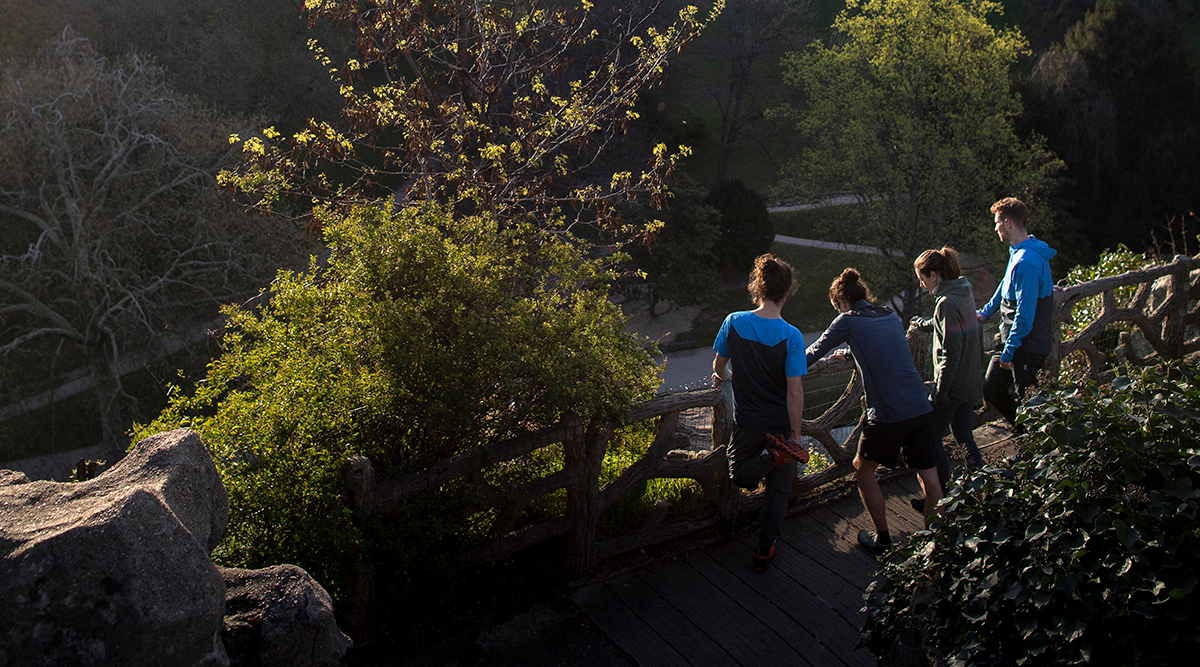 Running on clouds gets taken to a new level. For the first time, two layers of CloudTec® combine to offer hierarchical and sequential cushioning in the revolutionary Cloudstratus.

The first On hiking boot

The launch of the Cloudrock Waterproof marks the arrival of the first On hiking boot. At the same time, the next-generation Cloudventure Peak™ adds Missiongrip to the ultralight feel of its trail-racing predecessor.

On goes Back to the Source

To celebrate our origins in the Swiss alps, where the first On business plan was put together by our three co-founders while hiking in Engadin, we went back to the source and built the temporary On Mountain Hut. Completely self-sufficient and set up to leave no waste behind, it offered a home for two, constructed from sustainable materials in keeping with the alpine setting.

The iconic silhouette continues to evolve with the ballistic canvas of the Cloud Dip, the 3D-embossed upper of the Cloud Beam and the bold color blocking of the Cloud 50 | 50. The original limited-edition Cloud Edge evolves to become the Cloud Terry and is eclipsed as the fastest-selling On by the Cloud Edge Moon. Released to mark the 50th anniversary of the moon landing, this ultra-limited edition see over 50% of pairs sold within 15 minutes of launch.

By joining On as a co-entrepreneur, Roger becomes a close partner to our founders and the On team. He brings his unique experience to help take our product development, marketing and fan experiences to new levels. Roger will also play a role in developing the athlete spirit that’s at the core of our high-performing culture. 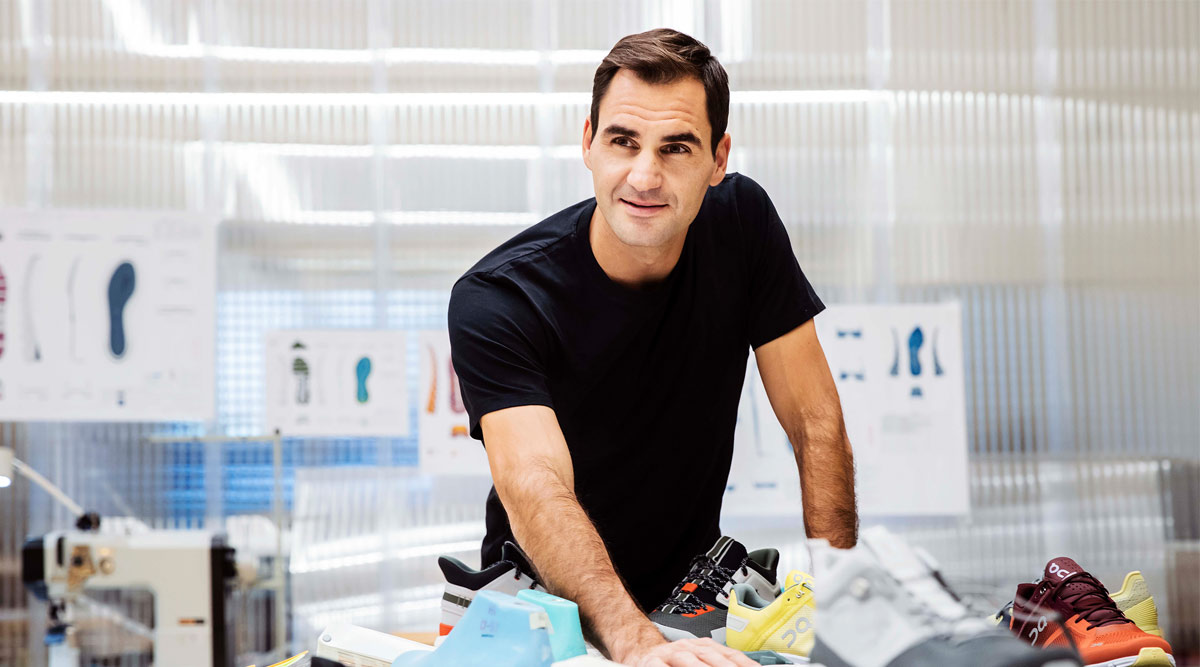 On continues to grow and so does our team of bright minds who think fast and think different. Think you could keep up? Then put your application on the start line. Visit our Careers page to see current opportunities. 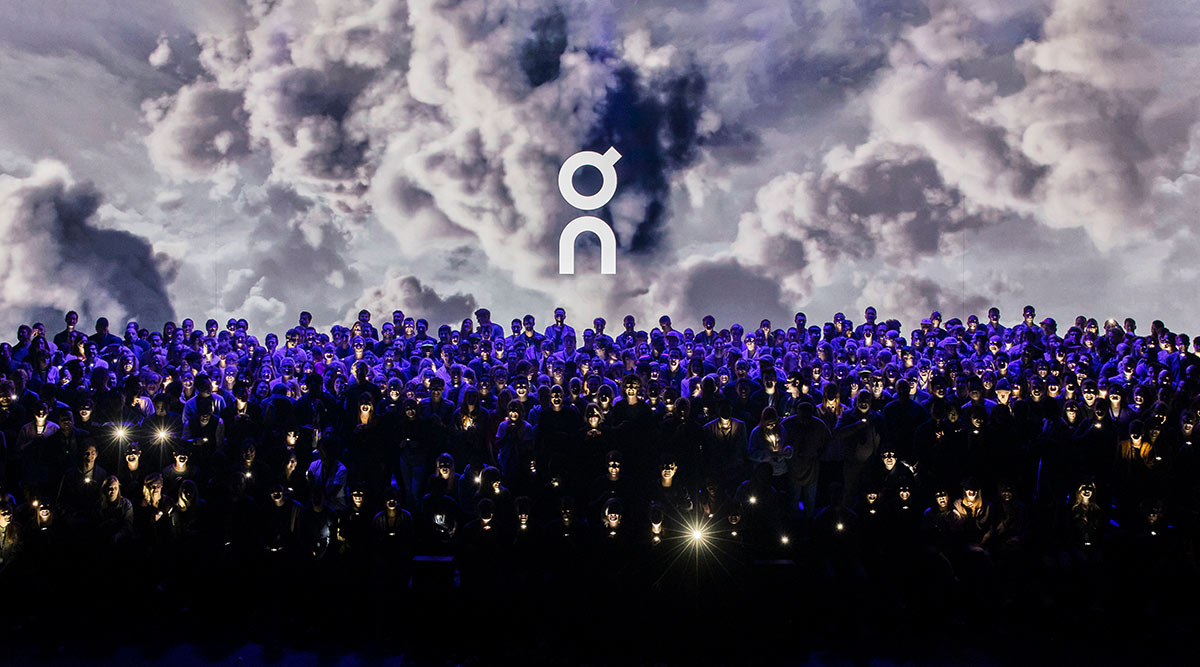 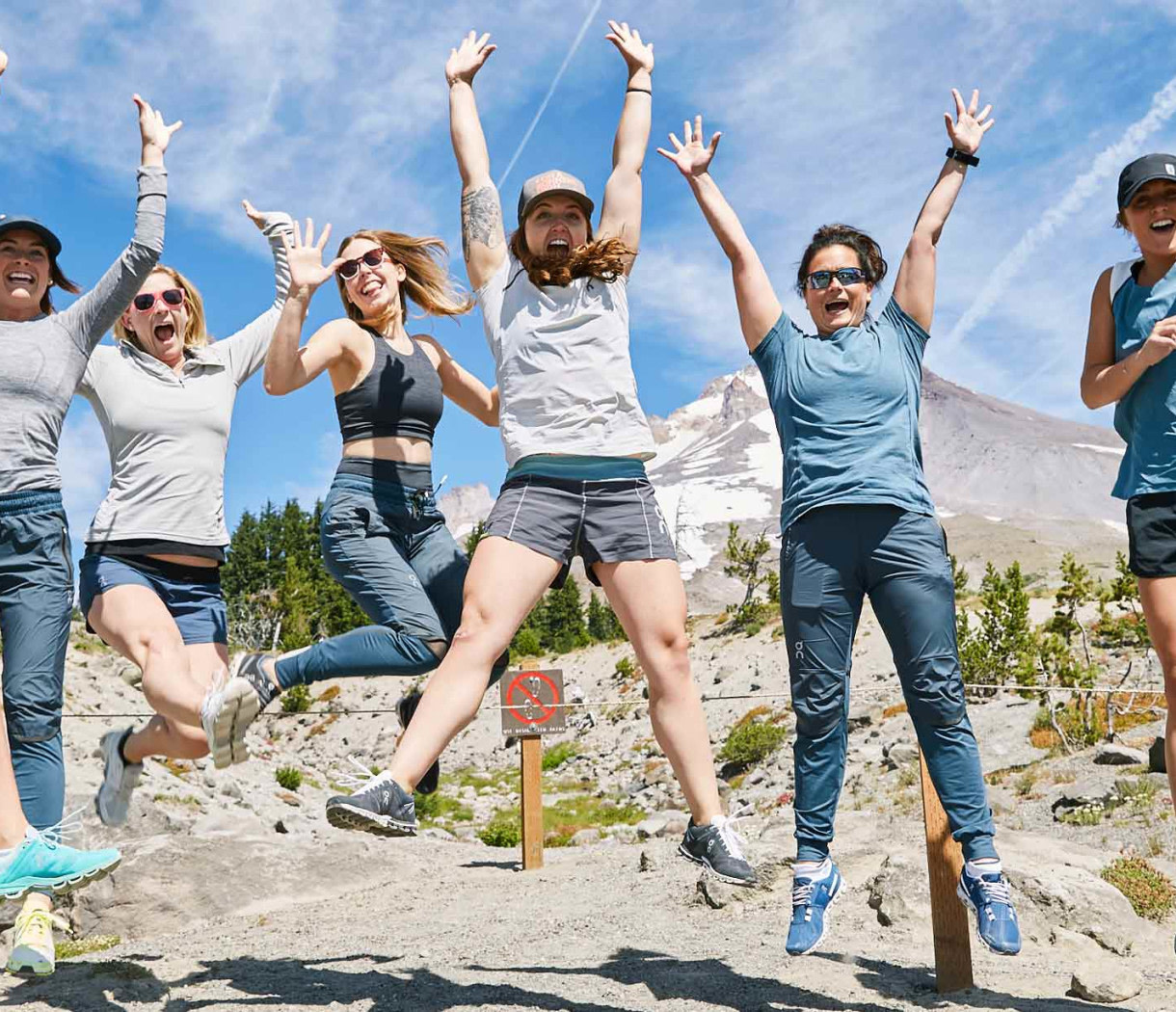 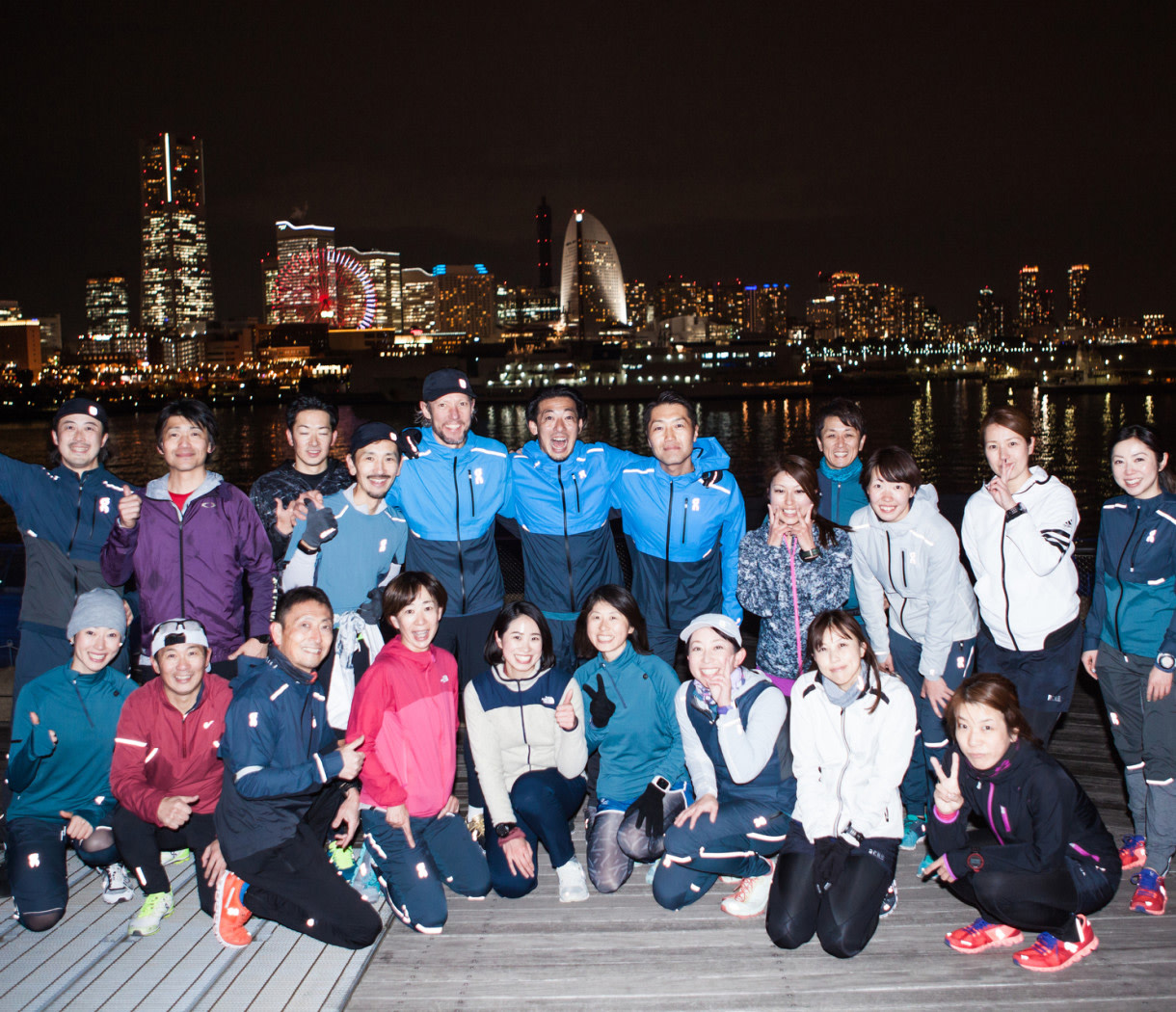