We dispatched Patrick Güller from the Helvetic Collective, a group of Swiss creatives, to capture the wild landscape of the Lofoten islands in Norway on camera. Patrick and his partner Viviane braved the elements to get up close and personal with a place that’s changed little since the Vikings called it home.

Autumn in Lofoten means rain, so when we touched down in Oslo in mid-September, our three-hour layover was spent studying the weather forecast and mapping out a plan for hikes and excursions. We were looking for an itinerary that would keep us on the move and active through this raw landscape with enough time for rest and recovery. There would be no avoiding the elements altogether, so we were prepared to embrace them with weatherproof gear.

On touching down at the Harstad/Narvik airport, we collected our rental car and headed to Harstad. En route we were greeted by the bright dancing waves of the aurora borealis. Our Norwegian adventure had truly begun, and in spectacular style.

Harstad is a small, picturesque city with a population of about 25,000, located on Norway’s largest island, Hinnøya. Harstad is also the ideal gateway for travelers headed to Lofoten and we took the chance to acclimatize to the fresh temperatures by exploring it briefly on foot. After enjoying some coffee and a cinnamon roll from a local bakery, we were ready to begin our scenic drive south.

The E10 road begins in Sweden, crossing Norway and ending at the coast. As such, Kong Olav Vs vei(King Olav V’s way), as the Norwegian leg is named, connects Lofoten to the mainland. It’s a truly remarkable route that runs alongside stunning fjords through countless bridges and underwater tunnels. A three-hour drive on this meandering route brought us to Henningsvær, a small fishing village on the southern coast of Austvågøy. The village is famous for its football field, improbably nestled on a rocky islet with views of open sea and towering mountains.

Viviane was keen to stretch her legs after our drive, and went for a quick run around the village. We always find running to be the perfect way to discover new destinations. Weaving along jetties and between fishing huts lets you get a real flavor of life in the village. 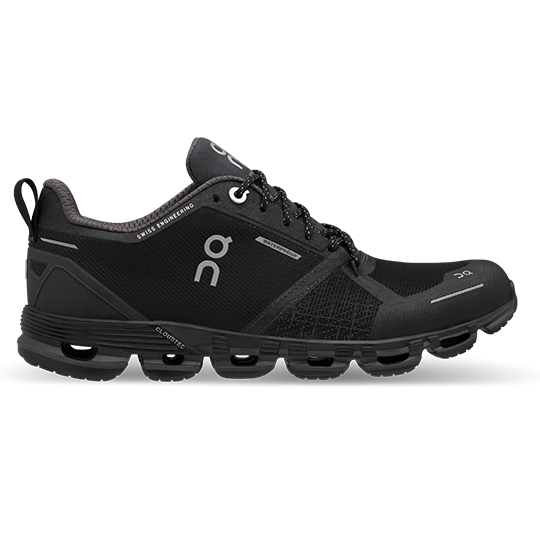 With the sky threatening rain, we decided to find a campsite that would allow an easy retreat to the car if conditions became dangerous. We headed for Yttersand, a beach located on the northern tip of Moskenesøy. From there, we took a brief hike to a lake we’re yet to find a name for, but that offered stunning views over the beach. The rain started as we began to unload, but fortunately we managed to pitch our tent quickly before the heavy rain hit. We drifted to sleep as the rain pelted our tent, but were awoken in the middle of the night by gusting arctic winds. We decamped quickly to a more sheltered spot and were soon able to get some rest. 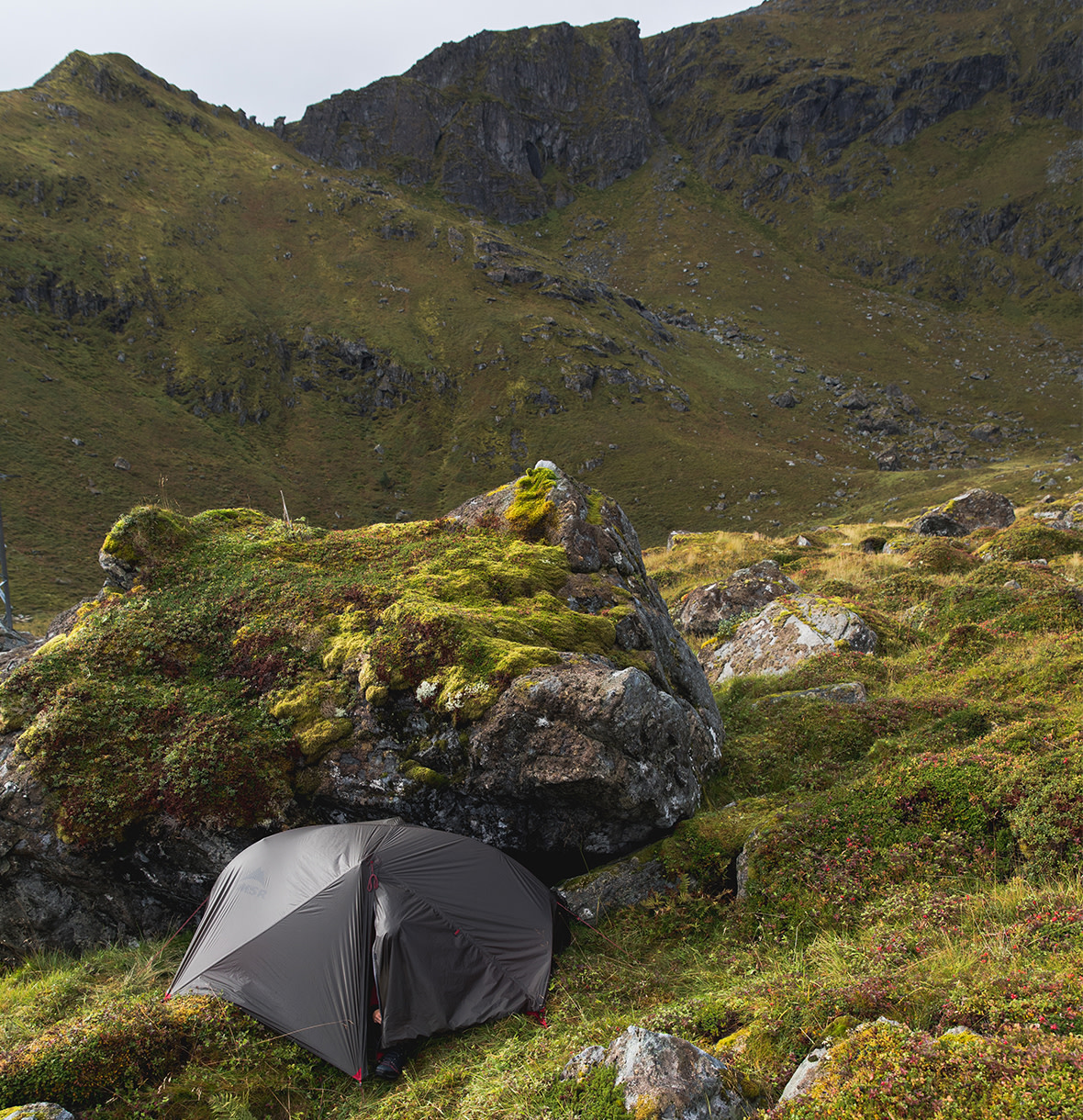 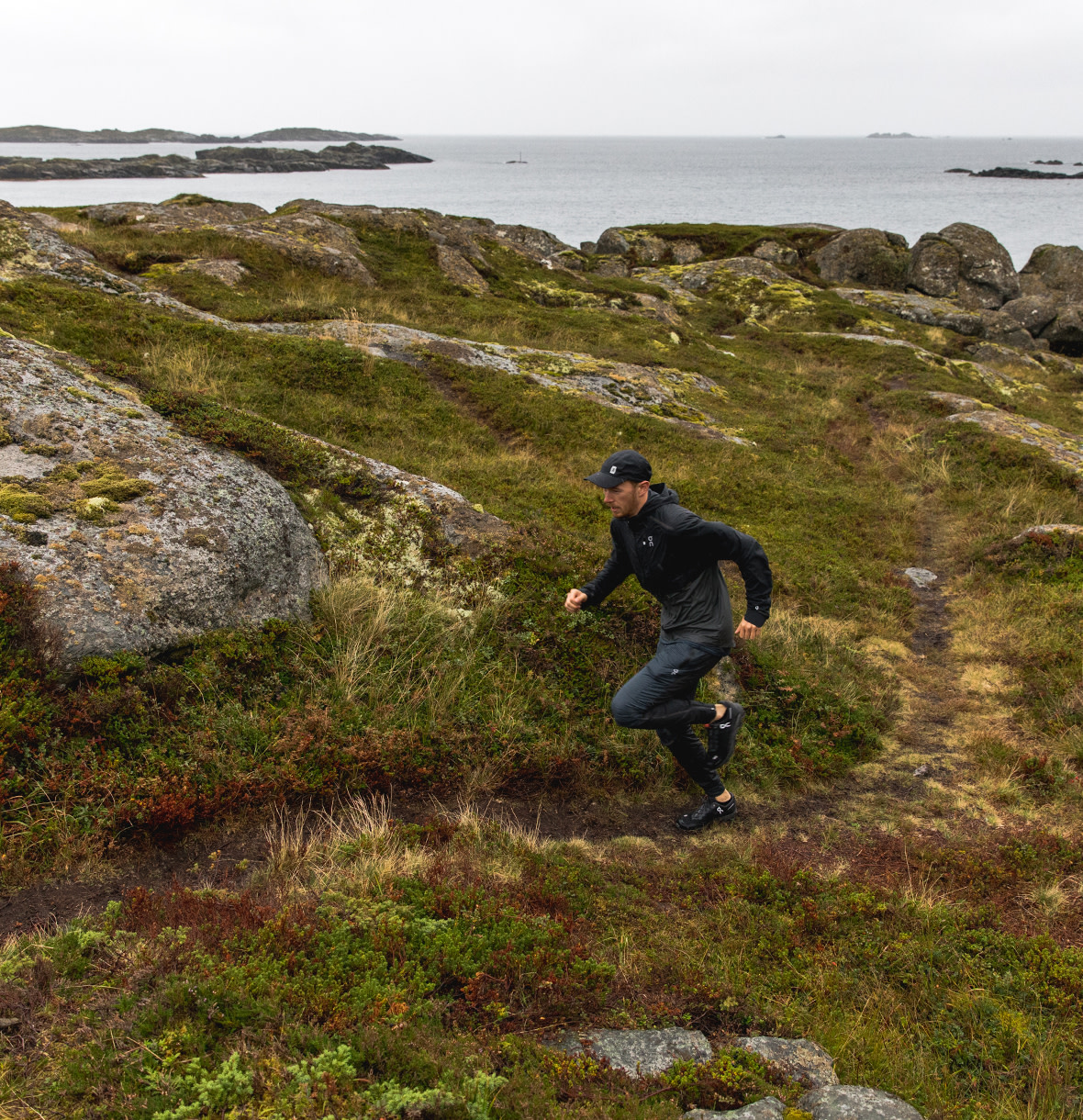 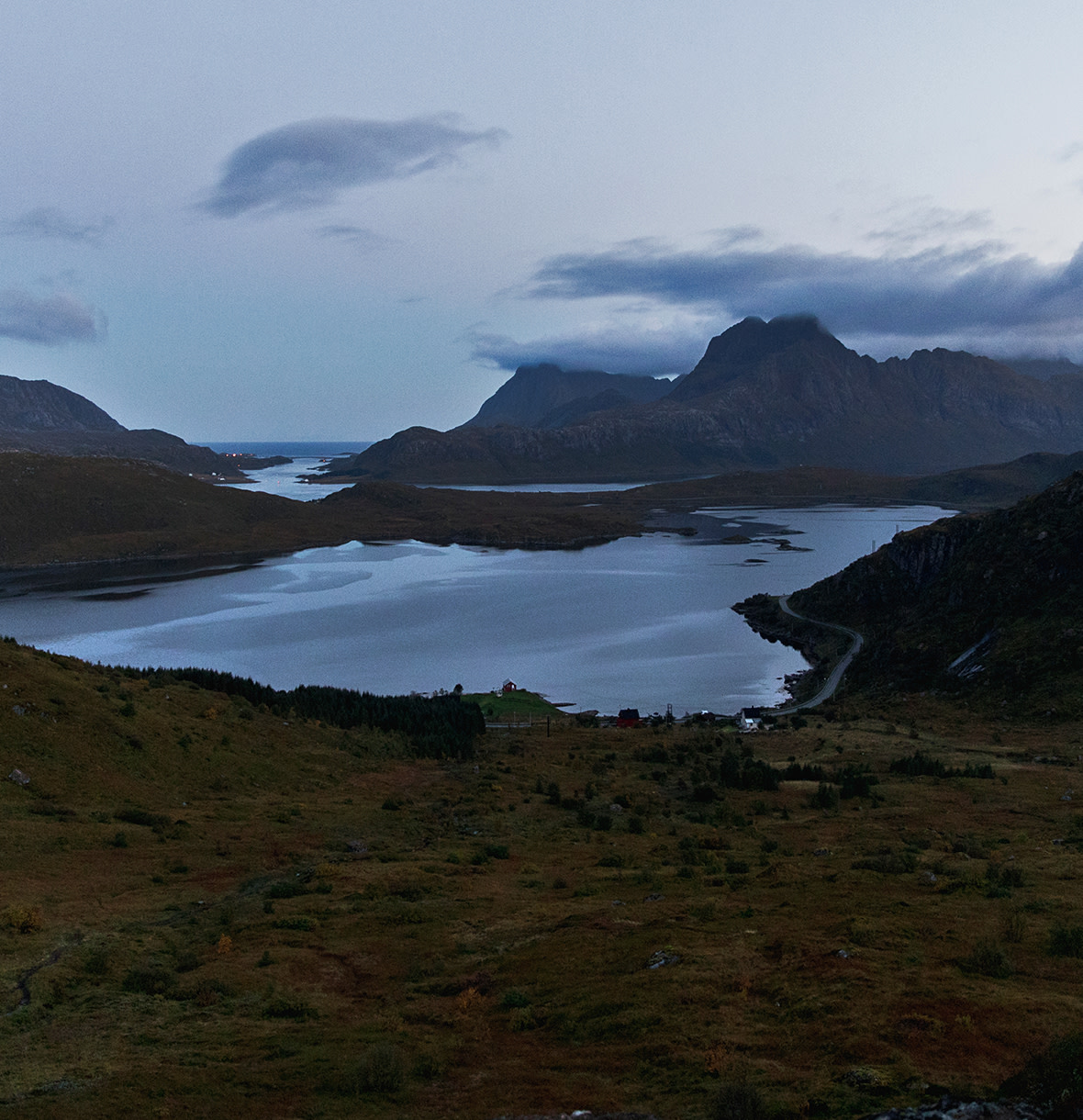 After a rain-soaked night outdoors, we were hungry and eager for a hot meal indoors. We dried our gear and set off for Ramberg, a village on the island of Flakstadøya. In Ramberg, we savored lovely local food – lamb for me, fish for Viviane – at the charming Kafe Friisgården. Once we were sufficiently satiated (and thawed) we departed Ramberg for Ballstad.

Our drive from Ramberg to Ballstad took about 40 minutes, and we arrived at the Hattvika Lodge. The Hattvika Lodge provides accommodation in traditional “Rorbuer,” or renovated fisherman’s cottages, with gorgeous views of the harbor of Hattvika. We were greeted by Roland Hummer, an Austrian mountain guide turned Hattvika Lodge general manager. Roland is a trail runner himself, and we were grateful for his guidance on routes in the area.

We immediately set about turning Roland’s advice into action and spent the evening taking a scenic run up the Mannen mountain peak. Mannen is a small peak, sitting only 400 meters above sea level, but offering incredible views of Haukland Beach. The setting sun dipped below the horizon before we’d made the summit, but the views on the way up made the climb more than worth the effort. 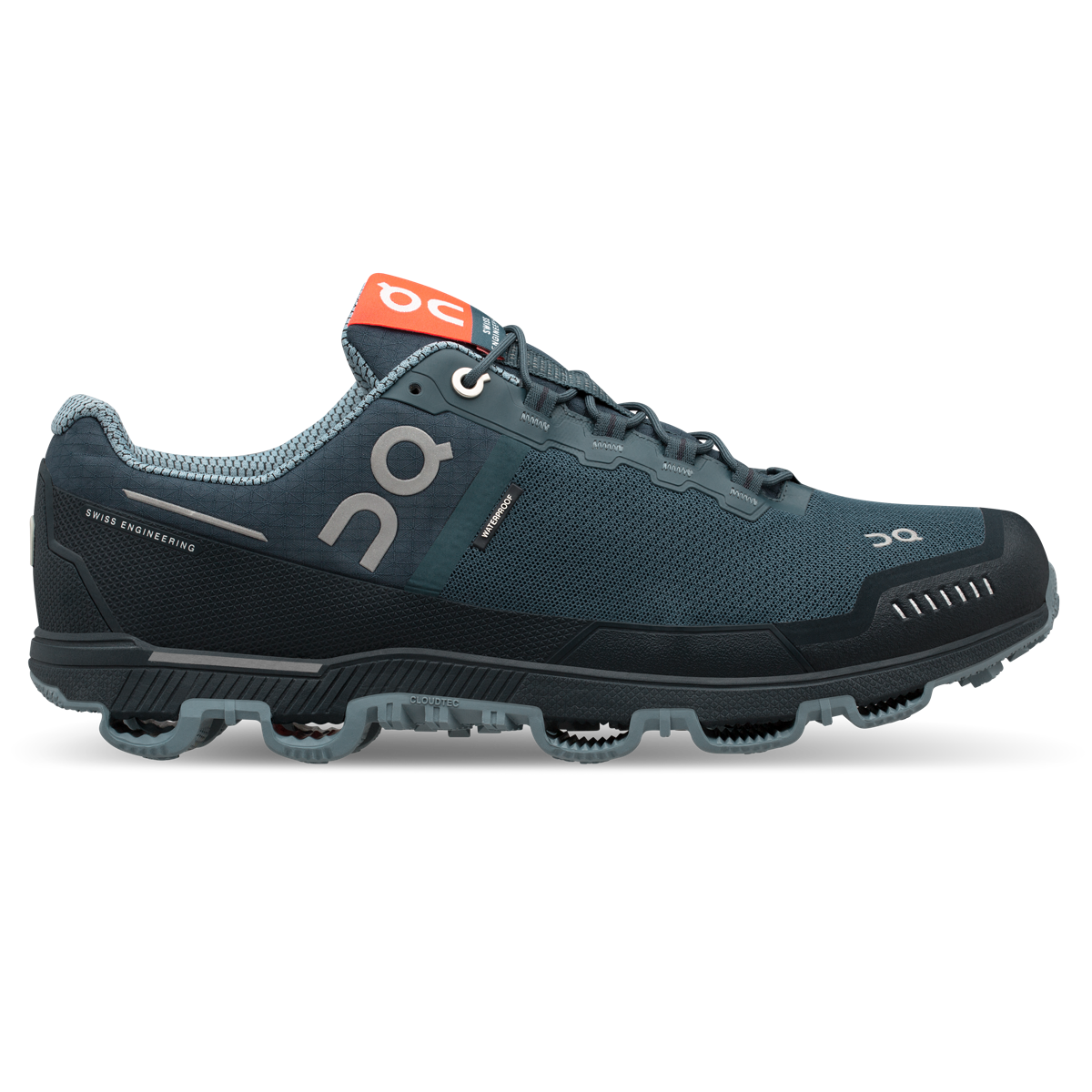 The Cloudventure Waterproof
Weather- wind and waterproof. Big on grip and cushioning. Swiss engineered for outdoor missions in all weathers.
See the shoe

After battling the elements the night before, sleeping at the Hattvika Lodge felt positively luxurious. We awoke refreshed and excited to start exploring before the rain returned that afternoon. We headed off to Nusjford, a picturesque fishing village located about 40 minutes away from Ballstad. The road to Nusfjord is beautiful in its own right, with a backdrop of breathtaking mountains.

While Norway’s autumn weather is variable, travelling in the off-season had a big advantage. Villages like Nusfjord are typically crowded with scenery-seekers during the summer months, but in September it felt like we had this unspoilt landscape to ourselves.

The following morning we were delighted to wake to a rain-free weather forecast. We enjoyed sunset views from the lodge, and decided to explore the fishing village of Reine, located immediately south of Sakrisoya and Hamnøya. While walking through Reine, we were lucky to stumble upon a boat that was imminently departing to explore the Reinefjorden, a three-kilometer fjord that runs between Hamnøya and and Andøya. The waters of the Reinefjorden were so still, it was as if the boat was gliding over a mirror.

Next to Reine lies a very small island called Sakrisøy. With rows of traditional Rorbuer huts perched between the crystal waters of fjord and sea, this village is truly postcard-perfect. We stopped in Sakrisøy for lunch, and were happy to find a quaint shop selling Norwegian delicacies and specializing in fish patties. We ordered this house specialty topped with smoked salmon and were not disappointed.

The clear, dry weather was holding. Determined to take advantage, we embarked on a trek up to Ryten, a famous viewpoint overlooking Kvalvika Beach (and documented extensively by Instagrammers). The hike begins from a parking lot off the E10 at sea level, marked with a sign for hikers headed to Ryten. The trail first took us through a meadow, muddy and uneven from the recent rain. After roughly one kilometer, we came upon an old farm track to follow. Two kilometers further, Kvalvika Beach appeared deceptively close, but there was still a way to go.

The descent to the beach was quite technical, and we carefully navigated slippery rocks along an unmarked trail. Luckily, the way up to Ryten was much more enjoyable, if muddy. We made it to the top, however, and quickly discovered the slippery rocks and mud were worth it. Ryten offers panoramic views of Kvalvika Beach, expansive ocean, and surrounding mountains. With some clever camera work you can make your subject appear as if they are dangling directly over the ocean – an obligatory photo opp that will amaze your friends, family and social media followers. Just don’t tell them it looks much more daring than it actually is. 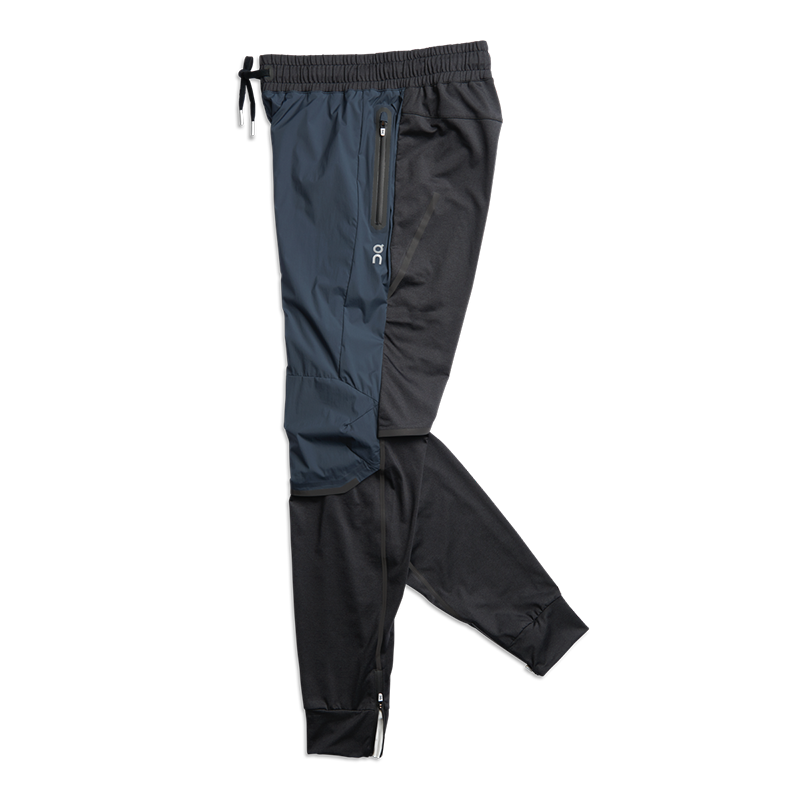 The Running Pants
Engineered for just the right amount of warmth, with freedom and comfort that lets you move.
Discover the details

On the final day of our expedition, Lofoten’s rainy season reared its unpredictable head yet again. We spent our morning warm and dry in our lodge. A brief break in the rain allowed us to go for a run around Ballstad. By the time we arrived back we were wet but invigorated. We recovered with a trip to the lodge’s sauna for the perfect post-run feeling after a chilly run in the rain.

We ended our final day in Norway with a heavenly meal of stockfish with risotto at one of Ballstad’s local restaurants, Himmel & Havn. After a very brief sleep, it was time to make the three-and-a-half hour drive back to the Harstad/Narvik airport for the return to Switzerland.

Lofoten is a wild untouched environment that touches you in more ways than you expect. In our rapid, technology-driven world it offers a complete escape and a reminder that, when it comes to beauty and power, nothing beats Mother Nature.