On athlete Matt Hanson blazes to victory at the Ironman North American Championships in a new world-record time of 7:39:25

Conditions at The Woodlands, Texas, on Saturday (April 18) promised to deliver a fast race for the 2018 Ironman North American Championships, and so it proved.

US star Matt Hanson knocked just under a minute off the previous world record of 7:40:23 set by fellow On athlete Tim Don in Florianopolis, Brazil, almost a year ago.

The feat needed a momumental effort from Matt as he was chased down by Russia’s Ivan Tutukin. In a dramatic finish the pair were neck-and-neck until Matt kicked away in the final mile of the run. UK On athlete Will Clarke came in third.

Although the bike course in The Woodlands was shortened to 110 miles on the morning of the race for safety reasons, 2 miles shorter than the full Ironman cycling distance, Ironman have confirmed that records set on the course will be recognized.

“I have been targeting this race since November.” Matt said. “I had a great lead up into the race. My coaches, Julie Dibens and Matt Bottril, worked together to make a great plan with the intent on having a repeat victory in Texas.

“Everything came together for me on race day. I really tried to stay composed leading up to the finish line, but the last three seconds when I saw what my time was going to be, I lost it!

"I never look at running time for the bike or the run, I just look at the ‘here and now.’ So the first time I saw the overall time was when I was running up the shoot to the finish line. It took a bit for it to set in. It was definitely an incredible feeling.

“I did the same exact course in 2017 and remember thinking ‘thereis no way I can go much faster.’ Having someone [Tutukin] run on your hip for 25.5 miles definitely brings out the best in you!

“Afterwards I went back to the finish line to bring in the final hour of finishers. What an amazing honor and a fun tradition to be a part of. I have a long drive home after awards, so not sure what I’ll do to celebrate this week. I’ve been away from home for three weeks now, so I’m looking forward to spending a bit of down time with my wife and my two dogs.” 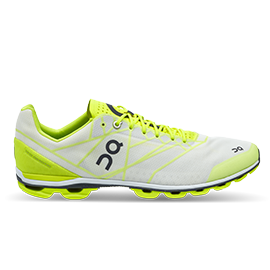 The Cloudflash
Matt's shoe for the fastest Ironman of all time
Discover the details
Tags:
CloudflashMatt-HansonIronmanOn the Road