Originally from Germany, Thomas Traum is now very much at home in London. He likes how England’s capital is a true melting pot of different worlds. Which makes complete sense when you see the work he creates with his team. From their office in an old print shop in the edgy district of Dalston, Traum Inc. collaborates with brands, galleries and media to create art that transports the viewer to new worlds unlimited by the forces of reality and unleashed by the latest CGI technology.

For the launch of the Cloud Hi Edge, we invited Thomas and his team to interpret the spirit of the shoe. The result is the striking, dynamic and intense world you see above. We sat down with him at his studio to go deep into this new dimension, and to hear how he pushes his craft to the Edge.

On: "Traum" is German for "dream" and you’re known for creating alternative realities – that can’t be coincidence?

Thomas Traum: No it’s not. I was part of that first phase of the internet where people started putting work online, and I needed a cool name. I liked it because I was already interested in computer graphics and making dream-like worlds that don't really exist. There was a virtual reality aspect. I started producing work under that name, then that became popular and suddenly the name stuck. Now I am part of a bigger operation with a team, I felt I should get rid of the Thomas and just keep Traum. It just kind of fits.

How would you describe the work you do here at Traum Inc.?

We are image makers, whether that’s moving images or stills. It’s always evolving. We have a design background but we do computer-heavy CGI work. We work with CG like a fashion photographer uses the camera. We make images in the sense that we frame things. We make sets.

We think of the world where the subject or topic we are playing off comes from and then ‘shoot’ it. We're not a service company, we create our own content, but we work with brands like On to create interesting work.

The project with On centers around the new Cloud Hi Edge. What was your first impression of the shoe?

I thought it was super cool. I was always waiting for On to do a sneaker. It's cool to finally see it, and to be one of the first to work with it.

In terms of aesthetics it’s a big leap for the brand. I'm really interested to see what’s going to happen with it. I think it’s the right mix between the On technology I recognize, like the CloudTec® and the Speedboard™. There's the engineered mesh as well, which is a traditional On performance fabric. But then there are many entirely new elements, especially on the upper.

How did your first interpretations of the shoe start to form?

On is linked to its Swiss heritage while being really forward-thinking. So we looked at how we could combine these two things.

We started doing a lot of landscapes in CG and I found the juxtaposition with the shoe really interesting. We asked ‘how can we combine these two things, in an almost brutal way?’

So we tried landscapes colliding with each other and the shoe surface, almost like tectonic plates crashing into each other. That's where the spirit of it comes from. It's quite bold, and I think it’s different.

The world you created for the Cloud Hi Edge spans four short related but independent clips. Why did you choose this format?

I thought it would be cool if there was sort of a trailer vibe, because this is an unveiling. I felt it needed intensity.

I had some information from On about the conception phase of the shoe – some clips and imagery the On Lab produced. It was research-based, and I thought that was interesting. When you think about something creatively, you also think in stages. One development step follows the next. So we visualized this process a little bit. You see the shoe 20 times but in a different way.

As an artist, it’s just amazing to have full liberty to create. With On we could be really direct with our ideas. We could create a series of short, visually seductive clips that are almost a work-in-progress. They feel quite raw. Normally you can't do that in a brand collaboration.

The Cloud Hi Edge makes its first appearance at Atmos Con in Tokyo. The concept of the On capsule at the event is“the storm before the calm.” Your work plays on this theme too…

I thought that would be really cool. To go from a world that's really busy and active to a moment of bliss. That's why the landscape experience is in there – you might struggle to get up the mountain, but when you're up there, you're like, “wow." That's why we have big, dramatic opening shots, with the sun rising, and the camera moving, and then we come down to a quieter world.

It’s a nice link to the shoe’s function for exploration and travel – was that deliberate?

Yeah, I think giving yourself space is part of work and life and of course links directly to On, because you guys are all about going outdoors. For me, it's really the obsession with landscapes as well. In creative terms I find the tradition of using landscapes in the art world really interesting.

You can look at work done hundreds of years ago by romantic landscape painters and now we have drones creating a modern interpretation of the same subject matter.

One thing I loved about this project was that we could superimpose things. We have two things playing at once and that's how I see things if I take a deep breath. We’re also using really new technology that reconstructs landscapes from drone footage. You get a really interesting sense of the materiality of the surfaces when you represent them using the computer. It's an old subject matter, but there’s timeless beauty to it.

The tagline of the shoe is“Taken to the Edge”. What does that mean to you?

Reflecting on personal experience, it’s that you never actually know what the limit is. A lot of people talk about exploring that ‘edge’, but not many people actually do it. That's an interesting link to On as well, because hardcore running is genuinely about going out and finding that limit.

For me, that’s the Edge. When you think of your world right now, it’s a false picture, because you can go beyond that and change your reality completely. What I learned about myself in the last few years is that your understanding of what you can do is so limited by where you think you are at that moment. If you want, you could be someone completely different next year.

Is there a similarity between the perception of limits for both athletes and artists?

It’s very similar. I use a lot of sports metaphors. There’s the cliché about going beyond the limit, but sometimes it's just about the limit itself. The pain. You have to go through the pain to achieve something you thought you couldn't do. It's not sharp pain, it's the pain of endurance – the pain of pushing your perceived limit. It's all in the mind – and it's the same in creative work.

Every project has a pain threshold. You're excited, then it gets a bit tough, then you do the work, and you don’t like the first result. Then you keep pushing and you find something new and it all comes together. You just always have to push through.

Do you find that, like athletes, you need not only the stimulus of movement, but also recovery time to be creative?

It's funny, I think about this a lot. For example, in August we shut down the studio to work only on our own ideas. It was fun, and I noticed you need that sort of break, because it makes you better. It’s hard to say no to a good project to take time out, but you do everyone a favor because afterwards, you do better work. You can also look into new things you might not have had the time to, so you can recharge and find new inspiration.

But there is a flipside to it. If you've got a high-intensity environment with lots of projects, the ideas come faster. There is also a certain need to maintain the pace. Like for athletes, you also need the habit in between, to keep showing up.

Are you a runner?

I used to run more, but I do still run. I have ideas about what I need on a certain day, because I've been doing sports for a long time. I go running if I need ideas. It's a surefire way to find ideas. It's the same with walking, but for me running works even better. Literally, if I don't know what to do, I run an hour and then I know.

What’s your take on the blurring intersection between sport and fashion?

High fashion is almost dying, and almost everyone is doing sports-inspired marketing. That’s the big trend of the last few years. But there can be a lack of credibility [for fashion brands entering the sports space]. It’s really good for On, because there’s no faking around with an On product in terms of running.

You know that’s where the product comes from – pure running. I find that intersection is really cool – visually, function inspires form.

A lot of products look good because they're really functional, and the technology is the appeal. A race car looks good because it's so pure. It has high-tech material and it's inspired by speed. With On products it’s the same. It’s the function that defines the shape and I like that.

You studied at ECAL, a Swiss arts and design school. When you’re working on a project like this for a Swiss brand, does that Swiss influence come out?

Yeah, I think it does, but on a purely subconscious level. The Swiss approach is about making something visually attractive and interesting, but also the craft and process. I see that from On as well – you need both and function.

Swiss design philosophy is process based. In the creative world, people often say, "I'm an artist, I can't have process,” but I think you need a process to be creative. It reduces the time you spend doing things that aren’t important. It’s Swiss efficiency in that sense. The Swiss have attention to detail, while also being open to the world. I think that's the pure ‘Swissness’. Being clever, figuring stuff out, but also being open to influences from the outside.

What kind of reactions do you expect people will have to your interpretation of the Cloud Hi Edge?

It’s always so hard to say .I just hope people watch the video and feel excited about it. That they think it’s cool. Personally, I'm really into shoes and sneakers, and I'm quite tired of that sort of normal sneaker approach with people in urban settings trying to look cool. It’s been done. And I think we've gone beyond that. I hope they feel it’s something truly original. 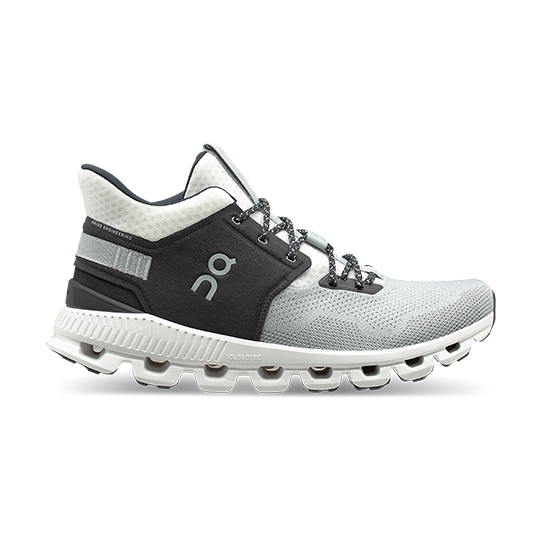 The Cloud Hi Edge
The experimental edition pushing exploration in materials and design to the Edge.
See all colors and details