Who are the Marais Running Club?

Introducing the MRC. Five years ago in the bohemian Marais district of Paris, six friends went running together. What they didn’t know then was they’d started not just a habit, but a movement.

Type “MRC Running Club” into a search engine and you’re immediately overwhelmed with hits for the world’s biggest running club hosted by a Danish craft brewer. Tracking down the Marais Running Club, who also go by the initialism MRC, is not immediately easy – but they’re ok with that.

The Marais Running Club is a welcoming but exclusive group. It has a very specific philosophy that all MRC runners all subscribe to. One that’s about sharing the right energy and experiences with one another in a close-knit group – not something guaranteed by many of today’s mass-marketed crews.

From carefully curated communications with members to hosting presentations from visionary speakers, the MRC is not like other running clubs. But make no mistake, at the heart remains a love of running, racing and improving – as athletes and people.

We spoke to Anthony, one of the MRC’s six original founders (all still regular crew runners), for more insight into what makes this crew unique – and their preparations for the epic 215 km Run Mate Lac Léman relay race.

Anthony, how did the MRC start?

“All six of us [the founders] lived together in the Marais neighbourhood in Paris about five years ago. We were in our mid-twenties, wrapping up our studies, partying hard; life was good. At the same time, living together and being there for one another gave us the motivation to start working out as well – specifically to go out for runs. A few of us had a background in athletics, others in football; but we all started embracing running and the culture of running together. Running became everything. That was 2013.

“Following that, we all started our careers and had to move out of our Marais “haven”. We wanted to put all of our energy into a common project and never lose sight of one another. We knew running was the perfect canvas to build that project on. So we created MRC.”

What did your first run as the MRC look like?

“Our first run was a tad disorganised. It was basically the six of us and a few of our friends. Our session was a 10k run and we started and finished at a bar called Wood in the Marais. That location, and the fact that it was a bar, probably motivated everyone to tag along! Today our club has found its pace, and so have our members. And we have the best “meeting” points (wink wink).”

How often does the MRC meet? Do you have a home ‘base’ to run from?

“The way we run MRC on a day-to-day basis is actually quite simple, no fuss. We organize a weekly run every Wednesday specifically at 8pm and run 10 to 12k. It’s the perfect mid-week stress release. We mostly run in the evenings because the streets are quieter, the air is cooler. You just join and let yourself be guided by one of our pacers. But at the beginning of every season we make it a point to regroup and decide on which official race we’d like to run in. These official races are generally 10k runs, half or full marathons in Europe. We also participate in a few races that we call “conceptual races” in Paris or even in the Alps. These races are either limited in participants or built around a concept. It’s important people know we are not certified running coaches, nor do we pretend to be, so we don’t give out training and conditioning programs to our runners. And we let our members guide the rest of the club as well with extra sessions.

“Home base for MRC is La Montgolfière. It’s a niche sports club where we always gather pre or post run and even on the days we don’t run. We organize workshops and creative talks there with guests from all over the world that share our values and vision of the culture of running. These guests are journalists, shoe designers and we even have an urban landscaper coming in the fall to discuss how mobility is shifting in cities.”

How many members are there now? How has the club evolved?

“We’ve organised major sessions in the past with a lot of people running together; but we don’t really do that any longer, other clubs have aced that format and we totally support them. Today, we’re still six friends handling MRC’s activity with a solid core of about 40 runners. We get to meet and run on a regular basis with a group of 10 to 15 people which for us is the golden number for a run in the streets of Paris.”

What is the MRC philosophy?

“Running with friends - without stressing over performance - has become a lifestyle and that is exactly what we promote and live by in MRC. All of our members share that philosophy actually, one that encompasses fun, simplicity, motion and NO time constraints. You don’t need a tracking app, a watch nor a pair of headphones blasting music to run. Running doesn’t have to be a competition with others or yourself. And we thrive on the fact that we get to gather a community on a regular basis where we support one another, where we share energy.”

What makes an MRC runner? What are the qualities, values and aspirations you share?

“Joie de vivre”, camaraderie and the desire to share are all values at the core of our running club. Outside of MRC, each one of us works in digital and innovations - yes you could call us tech geeks and that definitely brings us together too. And we’re always up for a challenge.”

What makes MRC different from other run clubs?

“MRC finds its singularity or “edge” in its format and structure; we like to call it a private club with limited member space and a true, palpable, sense of belonging. We also have our own “sur-mesure” way of communicating with our members or to the outside world – it is always curated in terms of content, wording and even imagery. We never overwhelm our community with news and updates. We keep it minimal, “in-the-know”. And the real reason why MRC is still up and running since its launch five years ago is because every single one of our members contributes awareness, no matter where they run in the world.”

What makes Paris a great place to run?

“Paris never quite looks the same. It shifts overnight. It moves. And it is completely mesmerizing at any given hour of the day. Running in Paris refuels your soul. We’ve established (and run) numerous tracks for our club and members in Paris, tracks that all have their own character (a historical building or street, a cafe that has stood the test of time, etc) and yet we are surprised every single time by the sight of a new detail. Paris is a canvas in motion.” 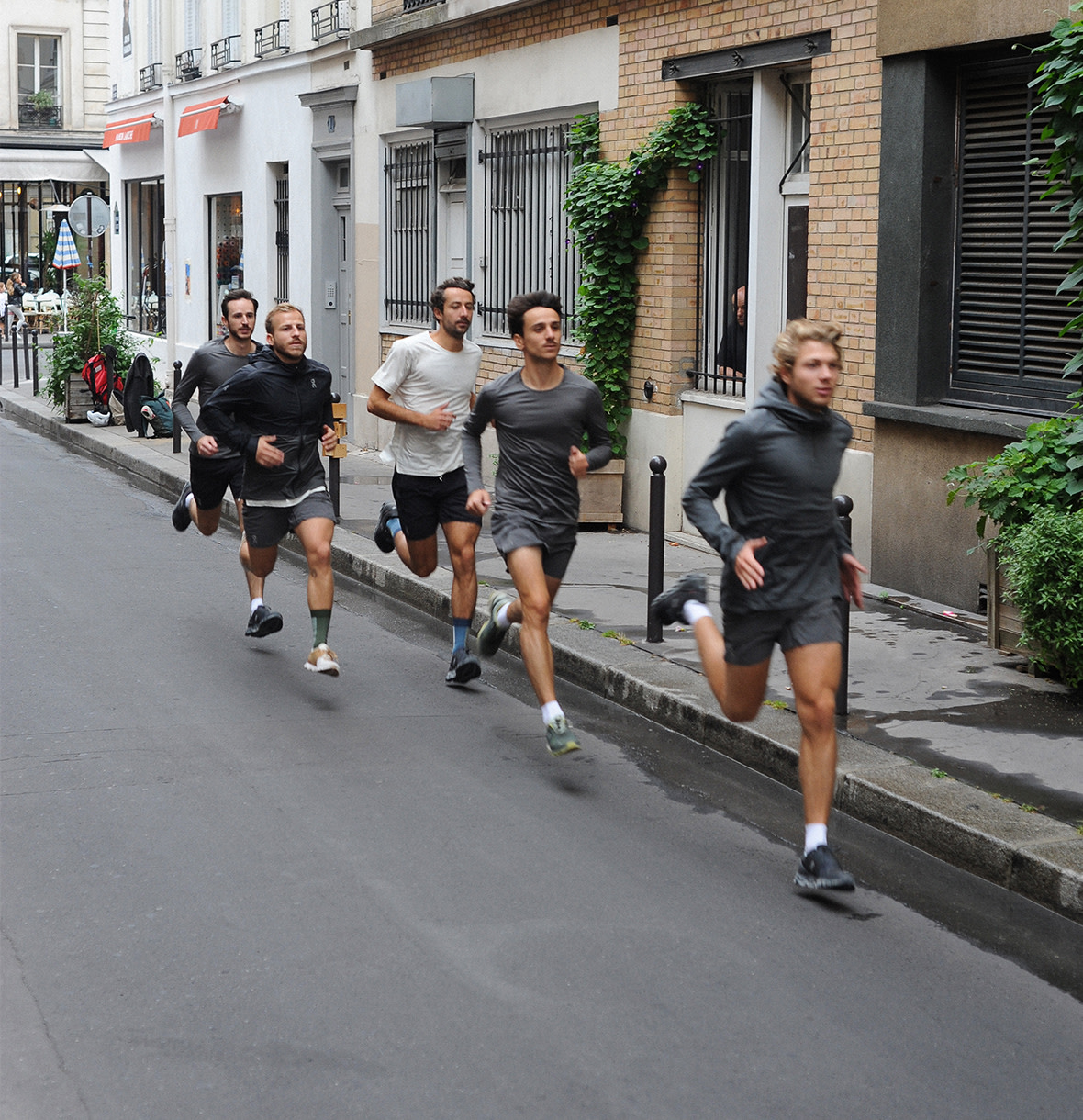 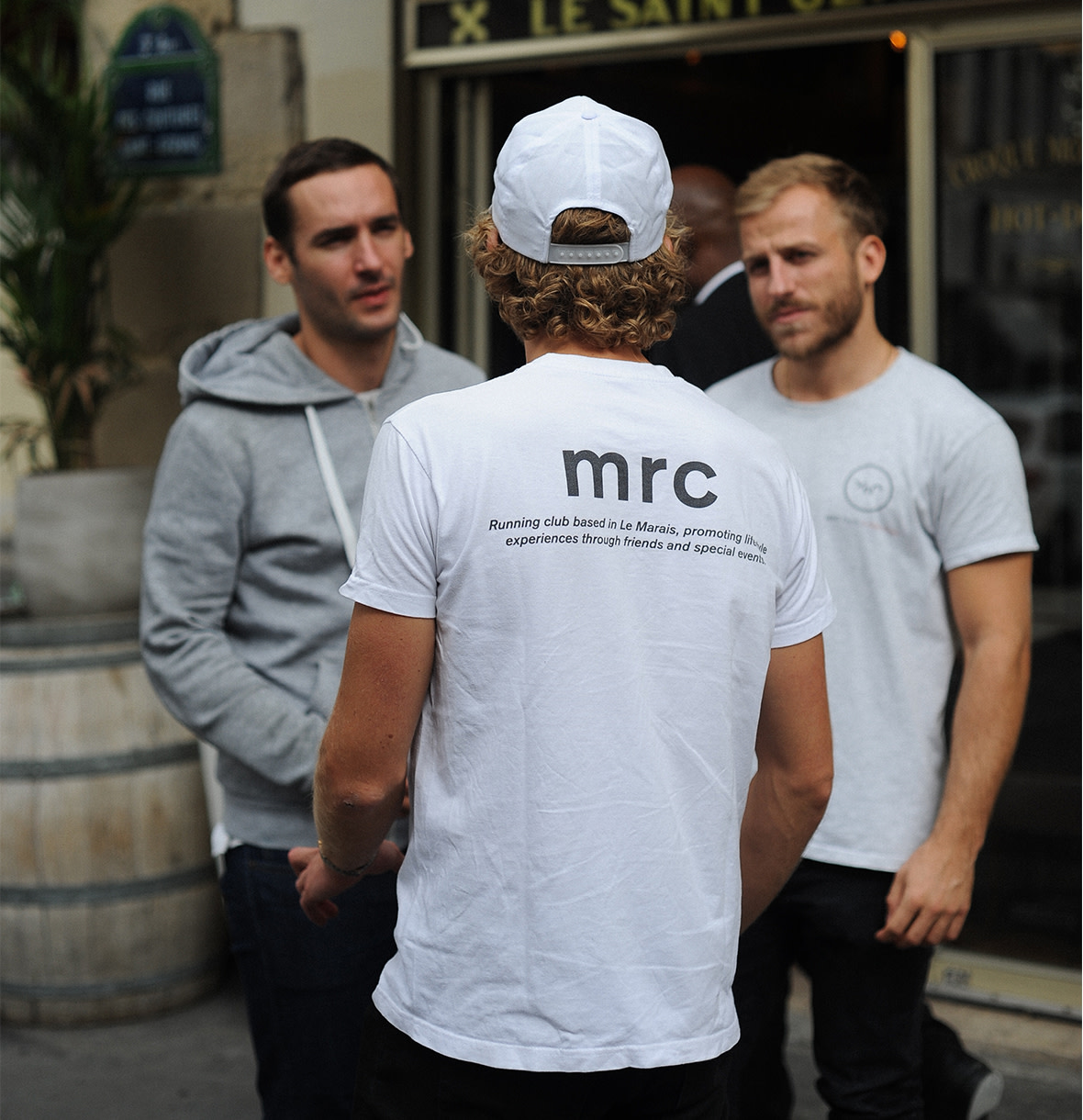 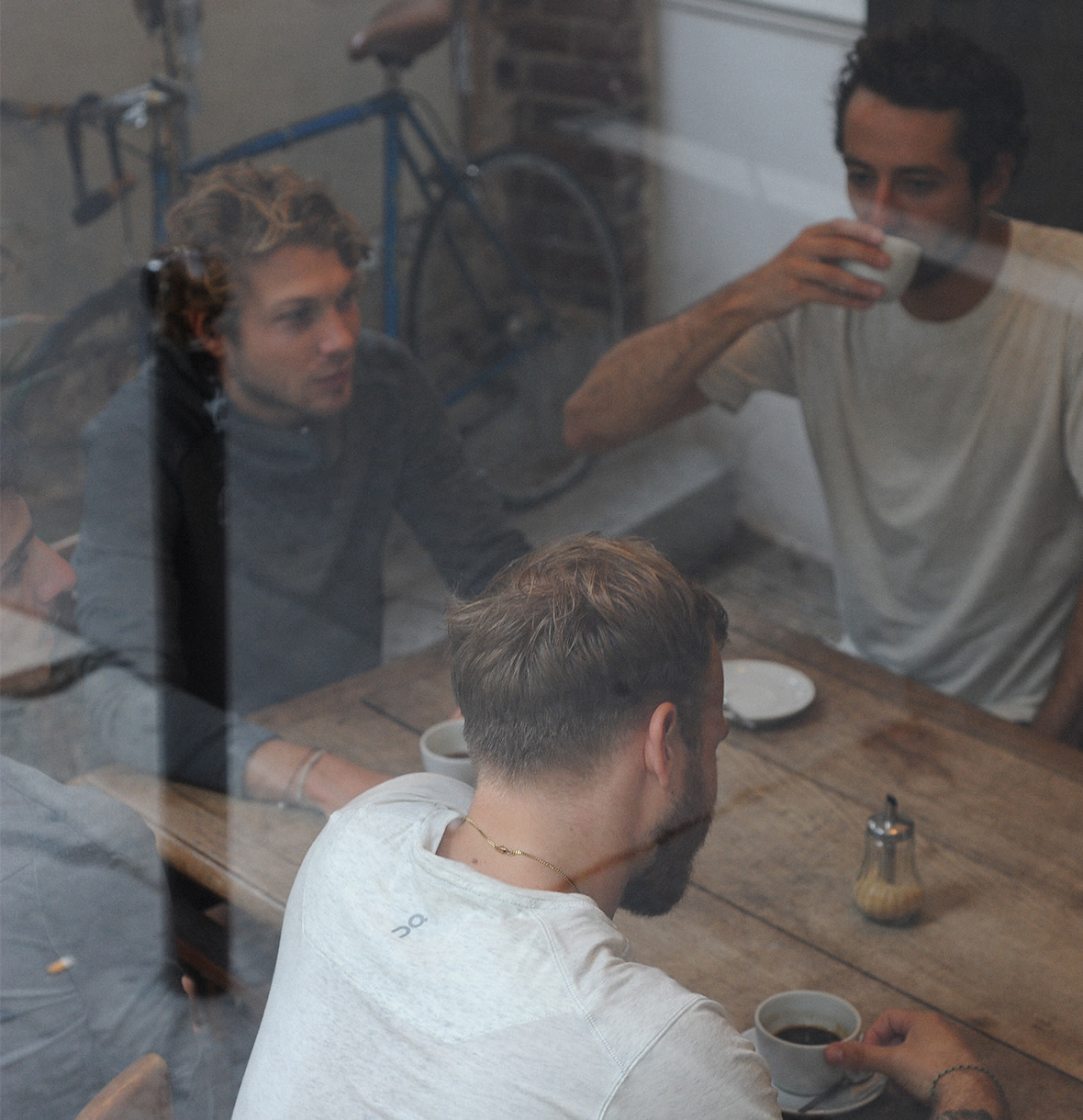 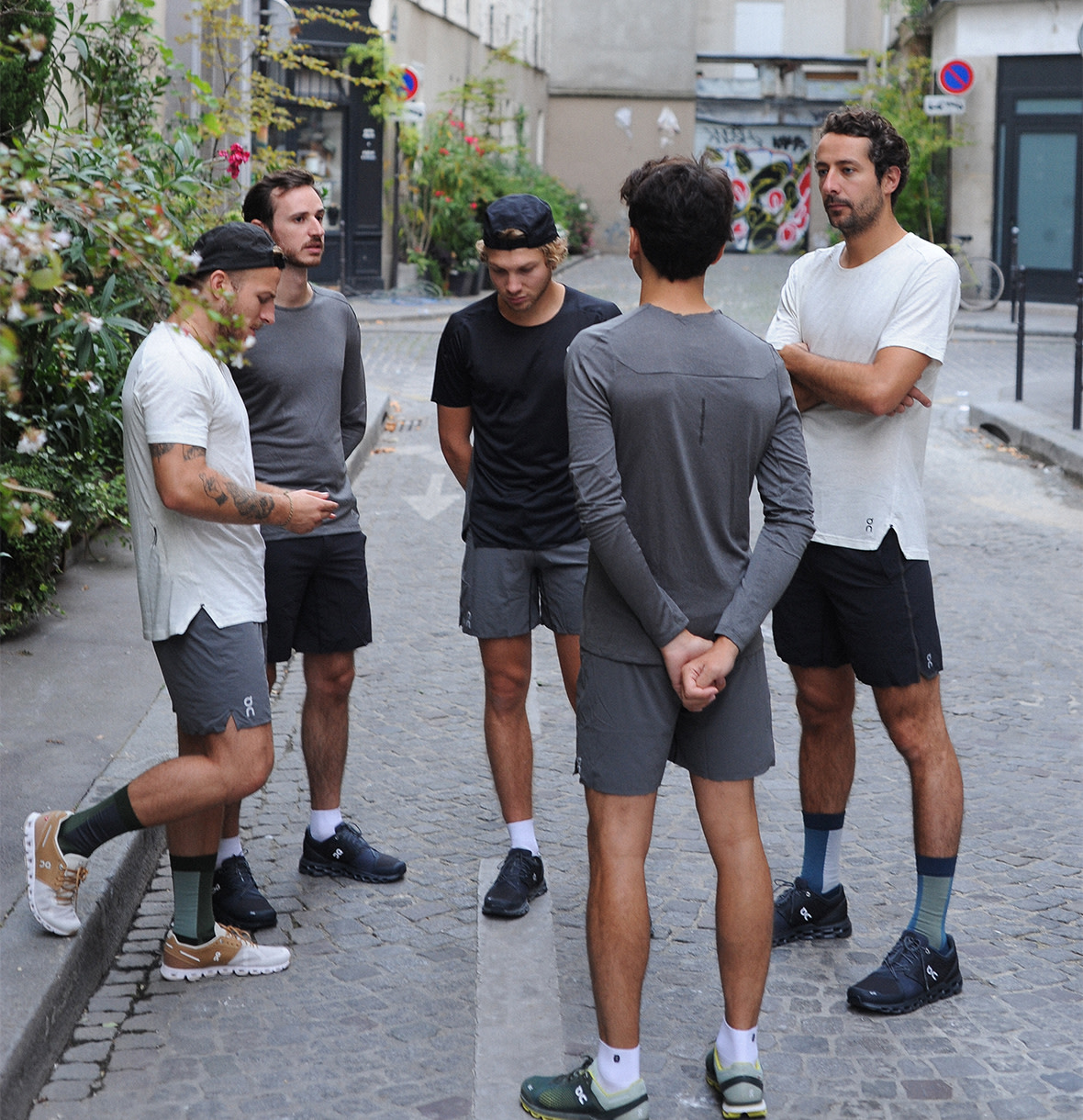 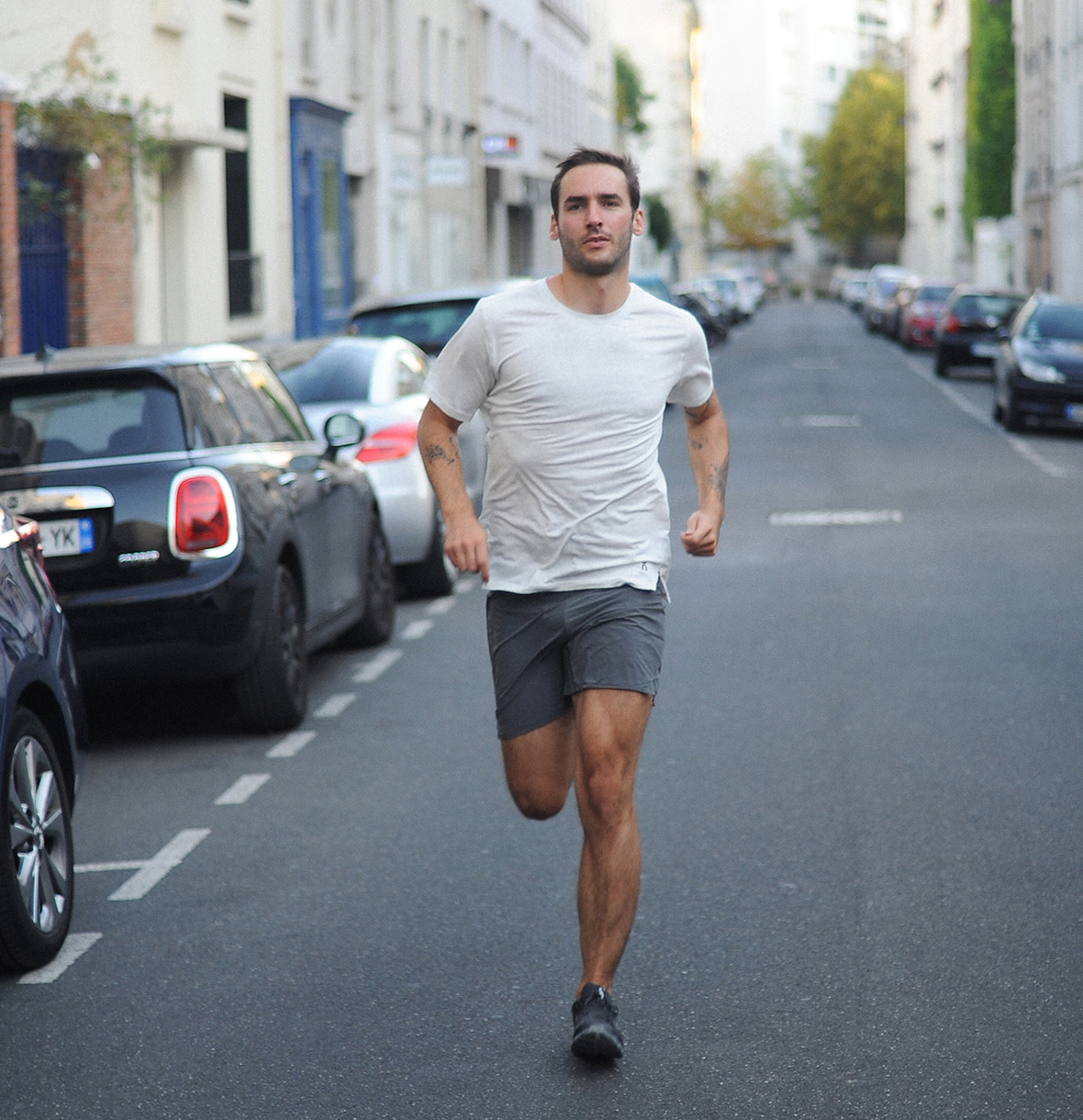 Why did you decide to sign up for the 2019 Run Mate Relay?

“All six of us currently live in Paris; but we’re all from the French Alps and specifically Haute-Savoie. So this race is home base. We got our bibs without even paying attention to the fact that it was 215km…(lol)”

Have you guys done any special preparation for the relay? Do you feel ready?

“It’s been really difficult training and preparing this summer because of the heat wave that took over Europe. Yet we’ve still picked up on training and conditioning schedules since July and we actually cycled around the whole track in order to get familiar with it. It’s definitely going to be a challenging run but in the most breathtaking of environments. 215 km of sweat, tears and pure bliss.”

Is there a target time or ranking in mind?

“Well, there’s going to be six of us on the track but we haven’t set a target time just yet. Our main goal at this point is to embody our running club values, On’s values, embrace the entire experience and celebrate with every other runner on Sunday. We’ll see you there right?”

The MRC crew run the 215km Run Mate Lac Léman Relay on September 28–29 2019. Follow along with their final preparations and every step of the epic challenge on Instagram.

Keep up with the MRC online, on Instagram and on Strava.