Javier Gómez on the podium at debut Ironman

On athlete Javier Gómez finishes in second place and under eight hours at his first full-distance Ironman in Cairns, Australia.

The winner on the day was New Zealand’s Braden Currie, who set a new course record with his time of 7 hours 54 minutes and 58 seconds.

With his sights set on the Ironman World Championships in Kona, Hawaii, in October, Javier selected Cairns for his first test over the full distance to mirror Hawaii’s hot and humid conditions. As the current Ironman 70.3 world-title holder, Javier has now secured qualification for the Ironman Worlds by completing a full-distance event.

Speaking after the race, Javier was pleased with how his first test at this level had gone.

I’m very happy with the performance. I learned a lot but there is still a lot to adjust. I now know I need to focus more on nutrition and pacing – on the bike, and especially on the run.

With this major milestone a under his belt, Javier is already looking ahead to the next events on the road to Kona.

“First I’ll recover with a hot shower and a big burger and will put my feet up. I’ll then have some easy training in the coming days. 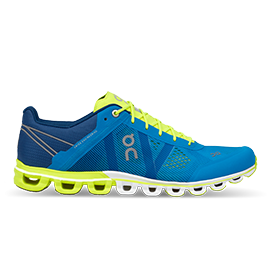 The Cloudflow
Meet the shoe that carried Javier Gómez to the finish line under eight hours - on his first Ironman.
See more
Mots clés:
AthletesCloudflowjavier-gomez